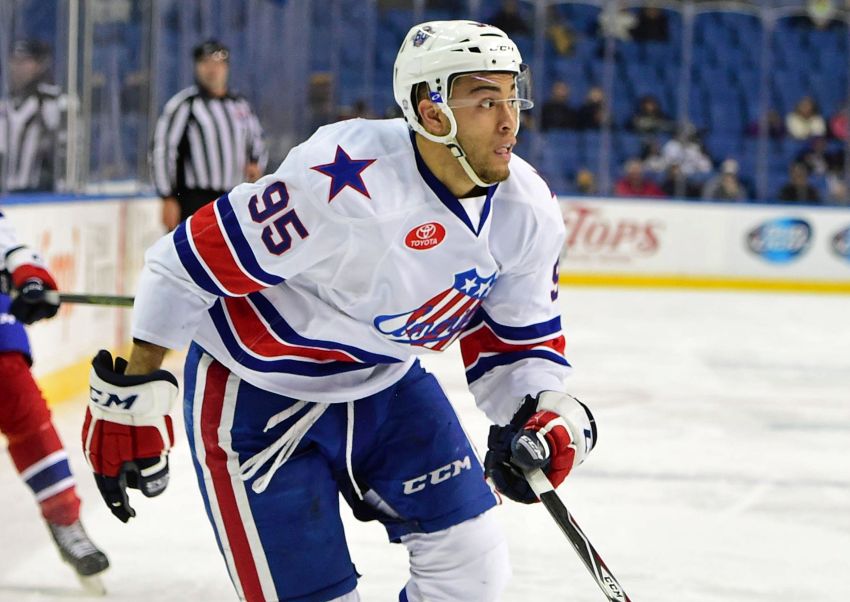 justin Bailey has been on a tear in Rochester. ©2016, Dan Hickling, Olean Times Herald

BUFFALO – The Sabres recalled rookie winger Justin Bailey, a Williamsville native who grew up rooting for the team, from the Rochester Americans this afternoon.

Bailey, the 52nd overall pick in 2013, has been scorching for the Amerks, scoring four goals and six points in the last three games. Overall, he has 10 goals and 23 points in 47 games.

Update: Bailey enjoyed one of the best NHL debuts by a Sabre in recent memory, pumping seven shots on goal in 11 minutes, 54 seconds of ice time in Thursday’s dreadful 5-1 loss. No Sabre had put that many shots on net in his first NHL game since Alexander Mogilny in 1989, according to the Elias Sports Bureau.

Bylsma, who said Bailey was the Sabres’ best player, bumped the rookie up to scoring lines later in the game after starting him on the fourth line.

Bailey will almost certainly play again Friday when the Sabres host the Montreal Canadiens. Winger Dan Catenacci left the game late after Philadelphia’s Radko Gudas leveled the rookie with a questionable hit that could earn the defenseman a suspension. Bylsma said Catenacci, who played his third NHL game, was undergoing concussion protocol.

The Sabres could have to recall another forward.