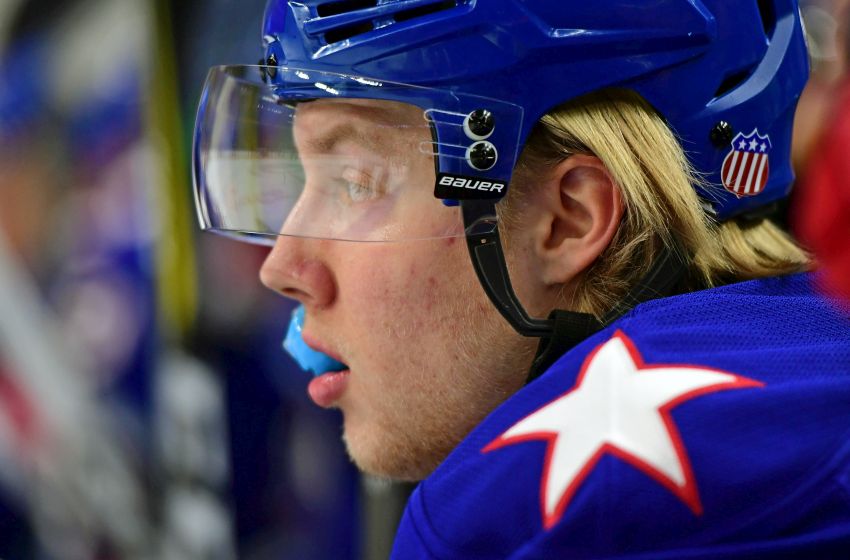 BUFFALO – Top Sabres forward prospect Alexander Nylander, the eighth overall pick in 2016, could be recalled from the Rochester Americans and make his NHL debut in tonight’s tilt against his brother, William, and the Toronto Maple Leafs.

Update: Nylander has been recalled.

Nylander, 19, was held out Sunday afternoon’s 2-1 road win against the Albany Devils. The Buffalo News reported the Sabres will summon the Swede from the AHL club.

When asked if Nylander would be joining the Sabres, coach Dan Bylsma replied, “We’ll see.”

In his first North American pro season, Nylander has nine goals, 27 points and a minus-20 rating in 62 AHL games. Nylander has four goals and eight points in his last 18 outings.

While those numbers aren’t exactly eye-popping, some experts have said Nylander possesses more skill than any youngster in 2016 draft.

With the Sabres eliminated from playoff contention, they probably figure it wouldn’t hurt to examine him against some of the world’s best talent. His presence could help ignite the Sabres, who lost 4-2 to the New York Islanders on Sunday afternoon inside KeyBank Center.

“We’ll see where he fits in,” Sabres captain Brian Gionta said. “I’m not sure what they have planned. We’ll find out.”

William Nylander, who’s a year older than his brother, has scored 22 goals and 59 points during a terrific rookie season.

Tonight’s contest against the upstart Leafs is the final meeting between the rivals this season.

The Leafs, the NHL’s worst team last season, have morphed into the league’s biggest surprise, roaring into third place in the Atlantic Division thanks to a torrid 6-0-1 run.

Incredibly, the Leafs’ top three scorers – Matthews, Nylander and Mitch Marner – are all rookies. Marner has 18 goals and 59 points.

The Sabres have beaten the Leafs two straight games.

Sabres rookie C.J. Smith, who assisted on Evander Kane’s second-period goal, became the second Iowa-born player to play in the NHL, according to the Elias Sports Bureau. Former goalie Scott Clemmensen is the other.

Smith wore No. 49, joining goalie Connor Knapp and forward Jerry D’Amigo as the only Sabres to sport the digits.

Gionta on bumping with his younger brother, Islanders winger Stephen Gionta: “It’s always fun. It’s always a nice challenge. You don’t change from the time you’re kids. … The competitive nature you had playing knee hockey is no different.”

Notes: Bylsma said the flu will sideline Sabres winger Kyle Okposo for the third straight game tonight. … Bylsma said defenseman Taylor Fedun (lower body, six games) has been skating on his own but has no timeline for a return. … The Sabres held defenseman Cody Franson (hyperextended joint, six games) because they don’t want him to play back-to-back contests. He could play tonight. … Sabres defenseman Rasmus Ristolainen returned from his three-game suspension, skating a game-high 26 minutes, 23 seconds. … Sabres play-by-play man Rick Jeanneret called the game from the 300 level seats with color analyst Rob Ray as part of “Family Appreciation Day.”