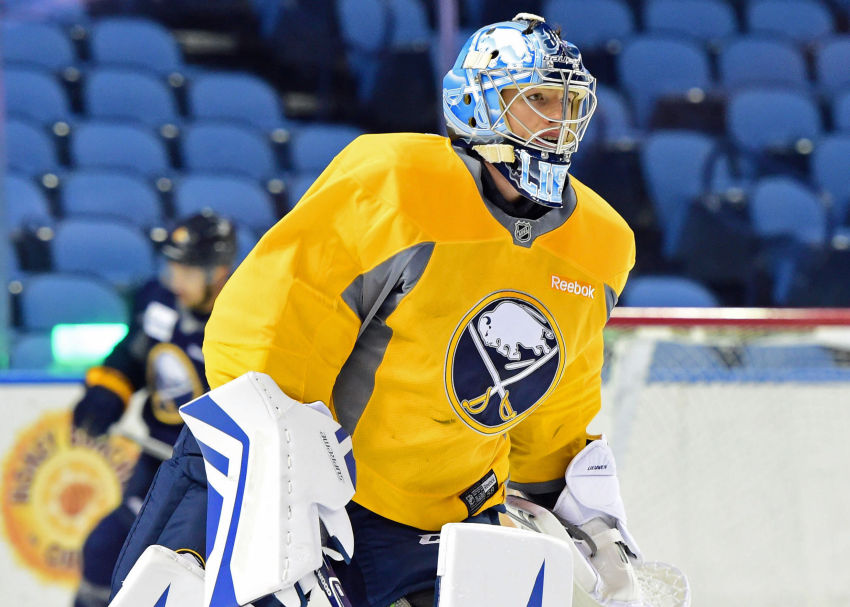 BUFFALO – With No. 1 goalie Robin Lehner injured, the Sabres have recalled Nathan Lieuwen, 24, from Rochester to back up starter Chad Johnson this afternoon against the Tampa Bay Lightning.

“He won the opportunity with his play in training camp,” Sabres coach Dan Bylsma said about Lieuwen, who played two preseason games.

The Sabres sent goalie Linus Ullmark, who had surgery on both hips during the offseason, to the AHL this morning. The Swede, 22, will likely start for the Americans tonight, his North American debut.

“I think we’d like to see the possibility of maybe seeing some of our goalies play in net as well, if we can get that opportunity,” Bylsma said inside the First Niagara Center. “Ullmark would be one of those guys.”

Bylsma had no new update on Lehner, who suffered a lower-body injury Thursday. Lehner underwent an MRI this morning and will miss more than a week. The Sabres placed him on injured reserve today.

In other news, the Sabres also sent defenseman Jake McCabe to Rochester this morning. The Sabres still have an extra defender, so Matt Donovan will take the pregame warm-up, Bylsma said. Captain Brian Gionta (lower body) is also out.

Update: Donovan is out again.

Bylsma joked the Sabres should start the game down 2-0 because that’s when they started playing in the season opener, a 3-1 loss to the Ottawa Senators.

He just wants to the Sabres to worry about themselves against the Lightning, the defending Eastern Conference champion.

“You play a very good team, a team people probably pick to be at the top of our conference at the end of the year,” Bylsma said. “But I think it’s too early for us to worry about the Tampa Bay Lightning as a Stanley Cup finalist team. Having said that, it’s not too early to make a statement on this team in playing them.”