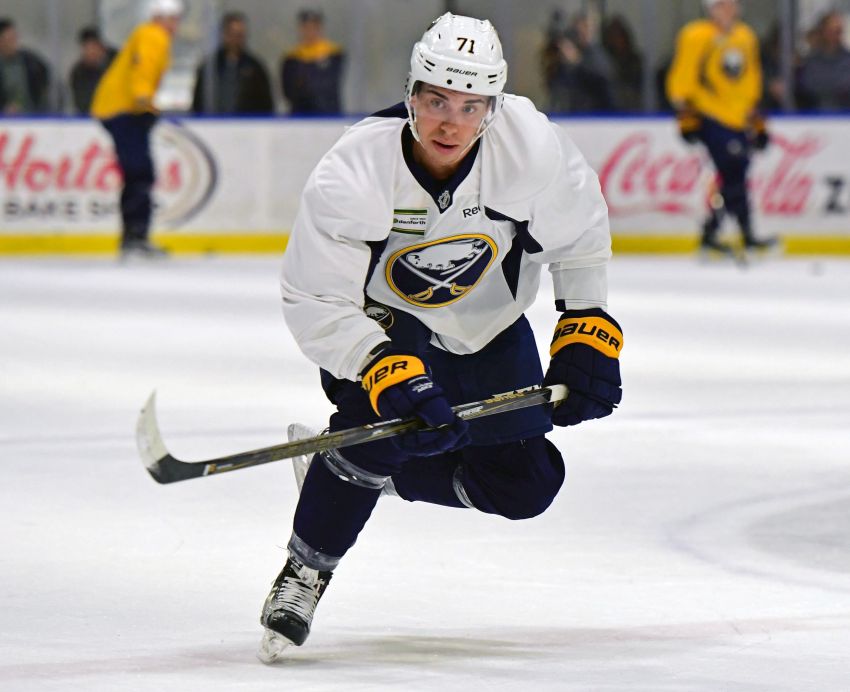 True, Rodrigues, 23, always seems to be grinning. But tonight’s tilt, which will be broadcast across Canada on “Hockey Night in Canada,” is extra special for Rodrigues, who grew up a Maple Leafs fan in Etobicoke, about 20 minutes from Toronto.

“It’s going to be cool,” Rodrigues said. “Watching ‘Hockey Night in Canada’ growing up, now playing, it’ll be a cool feeling. But I’m trying not to think about it too much and just prepare like any other game.”

The Sabres recalled Rodrigues from the Rochester Americans this morning. Rodrigues was summoned on an emergency basis Thursday but sat out a 5-2 loss to Anaheim because winger Evander Kane was healthy enough to play.

Rodrigues’ presence – winger Nick Deslauriers will be scratched – gives them a speedy center, something they will need against the potent Leafs tonight.

Bylsma joked Rodrigues should wear No. 22 instead of 71 tonight because he will be occupying Johan Larsson’s spot between Marcus Foligno and Brian Gionta.

“That’s really what he’s got to do for us going into that position between those two guys,” Bylsma said about playing like Larsson. “He’s had a good amount of experience in the American Hockey League and done a real good job with it, really kind of earned this opportunity.”

Rodrigues said: “Faceoffs are going to be key for me. I feel like if I can have success early in the circle I’ll get my rhythm going. They’re obviously two veteran guys. They’ll be talking a lot, which will help me out.”

Larsson is out for the season with a dislocated elbow and wrist.

Check back later for more on Rodrigues.

In other news, a bone bruise will sideline Sabres defenseman Cody Franson two to three weeks, Bylsma said. Franson blocked a shot Thursday and had a walking boot on his left foot Friday.

Defenseman Taylor Fedun will replace Franson tonight and skate beside Justin Falk, his partner in Rochester earlier this season.

Here are the rest of tonight’s line and defense pairs from left to right:

Bailey, who has shuttled between scoring lines and checking lines throughout his 13 NHL games this season, earned his spot on a top trio, Bylsma said.

“He’s stepped back in and showed what he did when he came up earlier in the year, which is adding that speed,” he said. “I think he’s had a little more tenacity on the puck and putting pressure on the opposition with his speed.”

In other lineup news, Sabres goalie Robin Lehner, who was pulled from a 4-3 loss here Jan. 17, will start tonight.

Tonight’s game is critical for the Sabres, who trail the third-place Leafs by seven points for the Atlantic Division’s final playoff spot.

“Real simple, barring a 60-plus minute game, we’re going to be five points behind the Leafs or nine points (behind) after the game,” Bylsma said.

– The home team has won 23 of last 27 meetings between the teams.

They host Vancouver on Sunday.

– Lehner has some awful numbers – 1-2 with a 3.49 goals-against average and a wretched .880 save percentage – in four career games against the Leafs.