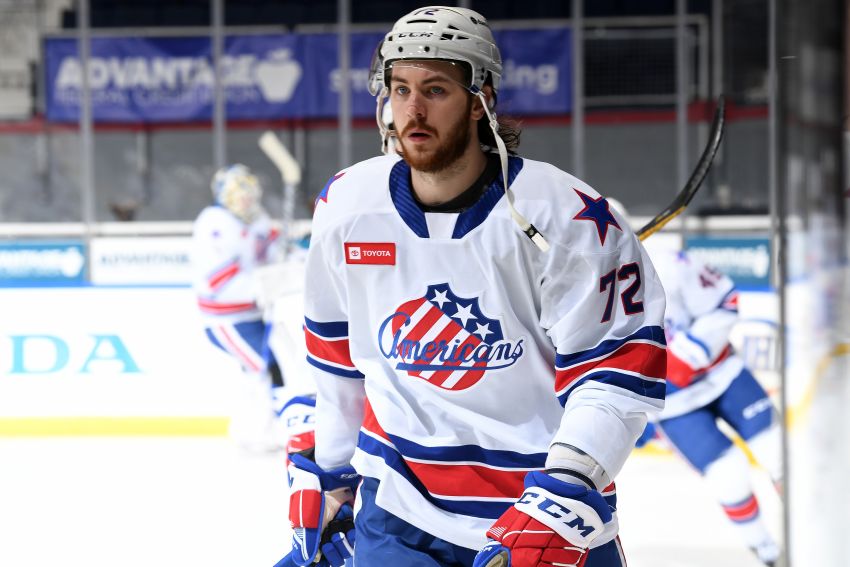 The Buffalo Sabres this morning reassigned forward Ryan MacInnis from the Rochester Americans to the taxi squad.

The Sabres need another forward for tonight’s game against the San Jose Sharks, so perhaps they will promote MacInnis, 25, to the active roster later today.

The 6-foot-4, 201-pound MacInnis has recorded six goals and 16 points in 26 games with the Amerks this season. He scored the Amerks’ only goal in Wednesday’s 2-1 loss to the Syracuse Crunch.

“He’s been a centerman most of his career, but because he has a pretty high skill level, hockey sense, feel for the game, he’s played a lot of wing in Rochester and done real well there,” Granato said on a Zoom call this morning. “The coaches there have felt he can slide into that slot easily. So I’m excited to see him.

“I’ve watched him since he was 16 years old … so I know Ryan and I think he has found a new level in his game just within the last few months. I think the guys in Rochester, coaching-wise, have done a real good job with him.”

The Sabres signed MacInnis to a one-year, two-way contract July 30. He spent time on the taxi squad last week.

MacInnis, the son of Hall of Fame defenseman Al MacInnis, played 26 games for the Columbus Blue Jackets over the past two seasons, compiling one assist.