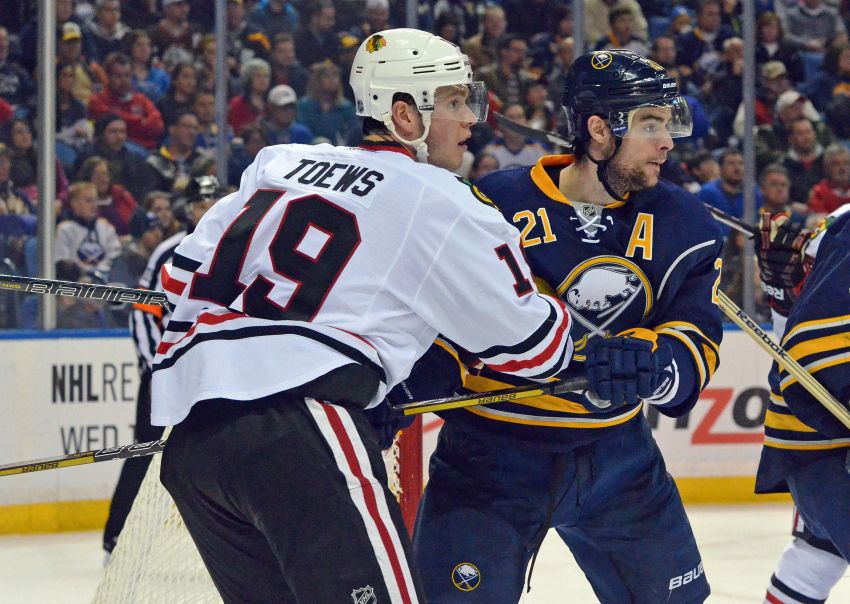 BUFFALO – About 15 Sabres gathered at a Tampa Bay restaurant Wednesday and nervously watched TSN’s coverage of the NHL trade deadline, unsure what their futures held.

“It was definitely a little stressful, a little anxiety involved,” said Sabres winger Drew Stafford, one veteran rumored to be on the block.

Stomachs churned and filled with butterflies staring at the screen. Everything can change in an instant.

“You’re watching and you’re seeing these guys on this panel that are basically announcing a tremendous change in your life,” Stafford said Monday inside the First Niagara Center after the Sabres prepared for tonight’s game against the Nashville Predators.

The rebuilding Sabres, of course, made three trades that day. Respected veterans Cody McCormick and Matt Moulson found out they had been dealt while sitting next to Stafford.

Naturally, Stafford, who’s quietly morphed into perhaps the Sabres’ best forward, felt relieved after the deadline passed. The Sabres had their team for the homestretch.

The roster has been changing throughout the trying season. Only nine players from the opening-night lineup played in Sunday’s 2-1 loss to Chicago.

“It’s a little bit crazy,” Sabres defenseman Henrik Tallinder said about the recent changeover. “But you know what? Everyone is on the same page in here. They knew what it was all about. Everyone knew that anyone could be traded. …

“In the long run, the future, it’s going to look pretty bright here.”

Five new Sabres have debuted in the last week, meaning everyone must acquaint themselves with each other.

“It almost reminded me of when I first got here, learning the guys on the team and knowing who the leadership was on the team,” interim Sabres coach Ted Nolan said. “All of sudden, you just start getting a grasp of that and handle on it, and all of a sudden there’s a new group. Not too often do you run through situations like this.”

“You don’t see that too often,” he said.

The Sabres’ rebuild has created plenty of opportunities for the team’s youngsters.

Winger Cory Conacher skated on the top line beside Stafford and center Tyler Ennis in his Sabres debut Sunday. In addition to another regular shift, winger Nick Deslauriers manned a point on the power play during his second NHL game.

Nolan wants these players “making the next stride in your career.”

“I think the leadership has really changed,” he said. “The dynamic of the team has really changed, and through change you see some rising to new challenges and some that don’t. Right now, it’s a great opportunity for some of these younger guys.”

With 18 games left, Tallinder wants to see “these guys take the next step.”

“They get the taste of it now, maybe a little bit more playing time in different situations and take advantage of it because you don’t know if you’re going to get it next year,” he said. “This is a chance for everyone to show what they can bring.”

Some veterans have also been given opportunities. With captain Steve Ott gone, Nolan awarded Stafford an alternate captaincy. Stafford wore an ‘A’ for two years before former coach Ron Rolston stripped it before the season.

“Maybe … he didn’t start the year the way he wanted to,” Nolan said. “But … he just persevered and he worked through it. To me, that showed good leadership on his side.”

Is Stafford happy to have the prestigious letter back?

“Yes,” a relieved-sounding Stafford said. “It was one of those things with the changes in management and coaching, you get it taken away in the beginning of the year, and then kind of coming full circle, it definitely does mean a lot.

“With or without a letter, I was still trying to make sure I was playing a certain way, taking care of the off-ice habits as well. It doesn’t matter if I was wearing a letter or I wasn’t. But it does feel good to kind of get that kind of acknowledgement, respect from management and the coaching staff.”