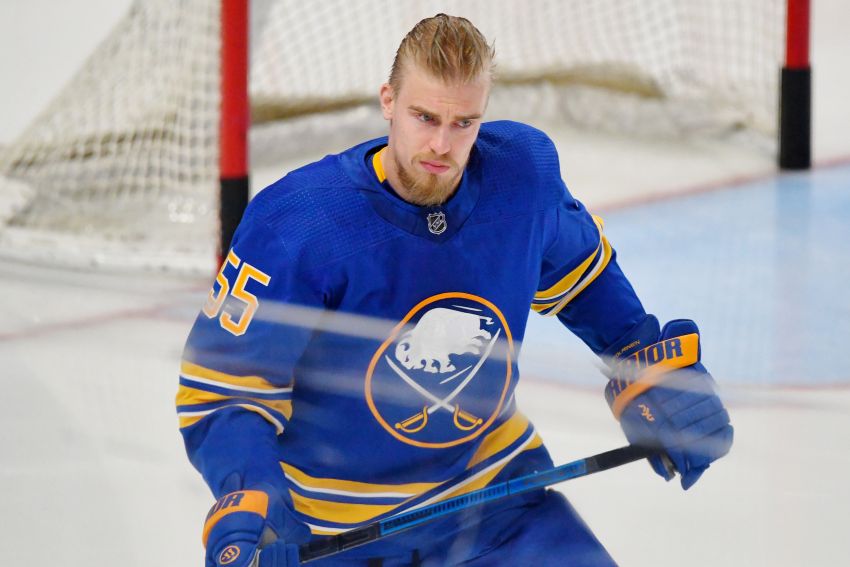 Rasmus Ristolainen has experienced a lot of losing in his eight seasons in Buffalo. ©2021, Micheline Veluvolu

In defenseman Rasmus Ristolainen’s eight seasons in Buffalo, the Sabres have never sniffed the playoffs. In that ugly stretch, they’ve finished dead last four times, including this year, when they won just 15 of their 56 games.

So not surprisingly, Ristolainen, who has one year left on his contract, told Sabres general manager Kevyn Adams he’s open to being traded this offseason.

“Like I told Kevyn a little while ago, I just said, ‘I’m open for all the ideas,’” Ristolainen said on a Zoom call Monday as the Sabres held end-of-season meetings inside KeyBank Center. “Right now, it’s hard, obviously, because the season just ended. Yeah, I’m frustrated. I’m (ticked) and it (stinks). So I told him I’m open to all the scenarios, staying or if he trades me, I’m fine with that.”

Ristolainen, 26, hasn’t totally soured on the Sabres. Of course, he would feel better if they made some offseason moves. But he’s encouraged by how some of their top young players performed down the stretch under interim coach Don Granato.

“The way the younger guys played this year toward the end of the year, it gives you confidence about the future,” Ristolainen said. “But for me, I can’t go for another rebuild or wait multiple years. For me, we have to get to the playoffs next year. For me, it’s either here or hopefully then somewhere else.”

He added: “If nothing happens, I’m back here and (will) do anything I can to help this team.”

Four months ago, the Sabres possessed a strong belief they could end what has become an NHL record-tying 10-year playoff drought.

Coach Ralph Krueger was fired. Hall and Staal, who struggled and contributed little on the ice, were traded.

“The way this year started, we all were excited,” Ristolainen said. “You saw the moves we made in the summer. I thought it was the best team since I’ve been here. It really (stinks) not making it. But, yeah, I don’t think we’ve been consistent enough. And that takes you to the playoffs. I think we played good here, and then you saw the next game is horrible. I think we need to be a lot more consistent.”

Ristolainen enjoyed one of his best seasons, compiling four goals, 18 points and a minus-18 rating while averaging 22 minutes, 17 seconds of ice time over 49 games.

The Finn endured a miserable battle with COVID, struggling to even walk up the steps in his home. But following his return, he played his usual 20-plus minutes a night.

By the end of the season, he looked gassed.

“It’s hard to tell, like if you think the last few weeks of the season if I was tired because of the COVID or tired because of the busy season,” Ristolainen said. “But, yeah, it didn’t help. Right after the COVID it took me some weeks to get at least get back to almost 100%. So yeah, it was tough. I guess the possibility is that it’s still affecting myself, the game and everything.”

“I should be full go for next season,” he said.

McCabe, 27, can become an unrestricted free agent this summer.

“I will continue to have discussions with Kevyn leading up to free agency to this point,” McCabe said. “Just kind of taking everything day by day.”

Sabres goalie Dustin Tokarski, who this season won his first NHL game since 2015, has been nominated for the Masterton Trophy by the Buffalo Chapter of the Professional Hockey Writers’ Association.