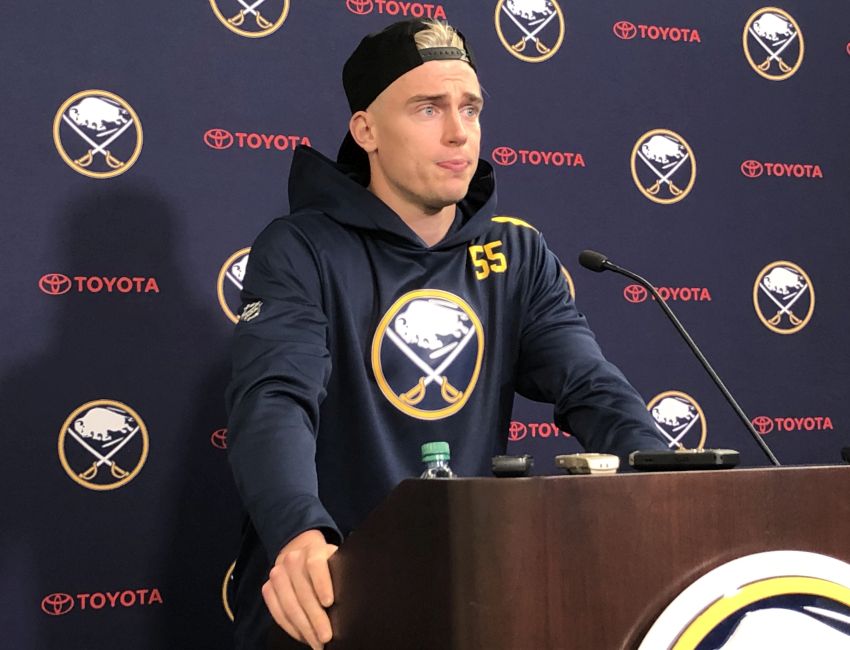 BUFFALO – Sabres defenseman Rasmus Ristolainen walked into the media room this morning inside KeyBank Center and couldn’t help himself.

“You’ve been waiting for this, eh?” Ristolainen said to a room full of reporters and cameras.

Just about all of Buffalo has been waiting to hear from Ristolainen, whose future here has been in question all summer.

“I’m happy to be back,” Ristolainen said after veterans reported today for their training camp physicals.

So, did the Finn ask general manager Jason Botterill to be traded?

“The conversations me and Jason have had is going to stay between us,” he said.

Ristolainen, of course, hadn’t spoken here since early April. Last month, he indicated in a Finnish interview he had asked to be dealt, igniting more speculation he wants out.

It’s no secret Ristolainen, 24, is frustrated and beaten down by all the losing he has endured over his six seasons here.

“I had an interview back home,” Ristolainen said. “I was just explaining, personally, how I felt and when you have rough years like I’ve had here the past six years and you don’t win much, that’s what you want.

“Things get rough and you get pissed. I was just telling (the media in Finland) the year wasn’t easy for me and I wasn’t blaming anyone else. Myself, I’m hard on myself.”

Does Ristolainen expect to be here next week or next month?

“I can’t control that, so I don’t need to really worry about it,” he said. “I’m here now and I guess I will be here tomorrow.”

The Sabres will hold their first on-ice sessions Friday.

“I’m really excited,” Ristolainen said of the season. “I’m in great shape. I just want to get better and help this team right now go to the playoffs. It’s nice to see all the guys after a long summer. When the summer is so long you get so excited when you get to put your hockey gear back on.”

Not surprisingly, Ristolainen spoke positively of new coach Ralph Krueger and the moves the Sabres made during the offseason.

Check back later for more on Ristolainen!