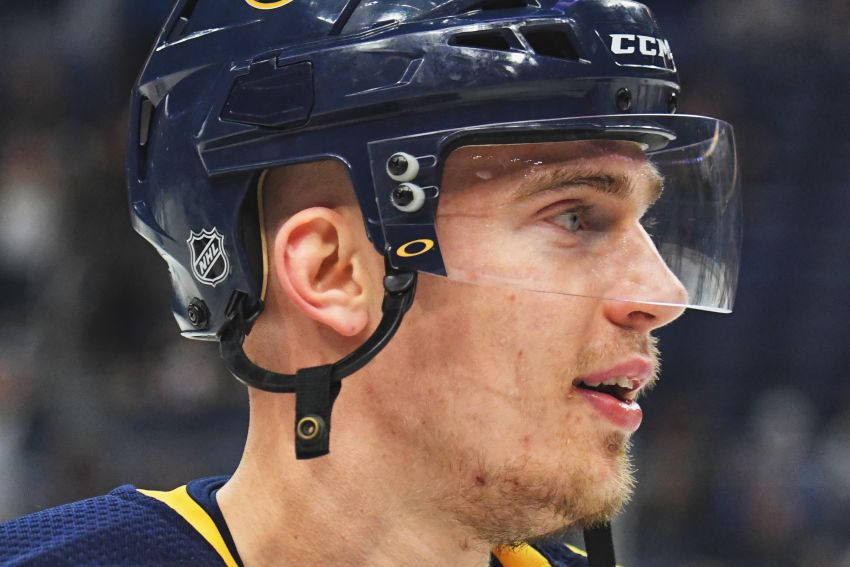 BUFFALO – Over the last four seasons, Rasmus Ristolainen has averaged 36 assists. No one should be surprised the Sabres defenseman can pass the puck well.

Ristolainen dished the puck from the front of the net, his new position on the power play.

“I feel everyone was kind of joking and surprised I can pass the puck,” Ristolainen said following Wednesday’s practice inside KeyBank Center. “But you know, I used to make plays, too. It’s not that hard to make a two-foot pass.”

Ristolainen made it look easy, corralling captain Jack Eichel’s pass before adroitly feeding Reinhart at the edge of the slot.

Instead of having him man a point, Sabres coach Ralph Krueger has been utilizing Ristolainen and his 6-foot-4, 220-pound frame in front of the net.

“I enjoy it a lot and take a lot of pride in it,” Ristolainen said. “It’s been working.”

The move has helped ignite the Sabres’ power play, which has scored has scored five goals in the last three games, as many as it produced in the previous 11 contests.

“He’s looked very poised down there,” Reinhart said of Ristolainen. “That’s a big part of it. If he didn’t look so poised, maybe I’d be a little bit more tempted to go down there, but he’s been doing a great job. He’s making great reads of when to stay in front of the net, when to release. It’s been fun to watch.”

As the Sabres power play endured a wretched stretch – it went zero of 16 over a recent six-game stretch – Krueger and his staff tried to find solutions.

So Ristolainen went up and Reinhart, who spent his first four and a half NHL seasons standing in front of the net, moved to the circle. With winger Victor Olofsson injured (lower body), Reinhart has taken over his duties one-timing pucks.

Krueger said he has often used defensemen up front during his coaching career. Ristolainen, who said he played winger for 10 years growing up in Finland, is three inches taller and 26 pounds heavier than Reinhart.

“Risto is just outstanding in those battles and has the calmness still and the hands to be able to deal with what’s necessary there,” Krueger said. “With the goaltending in National Hockey League today, you’ve got to get in their eyes as much as you can, you got to do it five-on-five and, of course, on the power play. He’s able to make it very difficult for any type of defending in front of the net for both the goalie and the defenseman.”

Ristolainen said: “I’ve been doing a pretty good job with loose pucks all over the goal line. I just try to stay in front of the goalie and maybe get good battles with their D. Maybe they focus on me too much sometimes and some other guys have more space.”

Since that meeting, however, the Stars have been scorching, compiling a 26-10-3 mark.

“It’s a different planet, really,” Krueger said of the Stars in October versus today. “It’s crazy watching them last night and this morning, there’s a directness in their attack, there’s a speed in their game we didn’t see when they were here. It’s as well-oiled a machine as we’ve watched in a prescout in a while.

“This is going to be a big challenge for us. They’re very confident.”

Following Vegas’ defeat to the Sabres, forward Mark Stone was asked how the Golden Knights can make sure their four-game losing streak doesn’t weigh on them.

“I don’t know,” he said. “It’s tougher, especially when you’re losing to teams you know that you’re better than. And we’re a better hockey team. (We) just have to find ways to put the puck in the net, and we’ve kind of gotten stale the last bunch of games.”

On Wednesday, the Golden Knights stunned the NHL, firing coach Gerard Gallant and replacing him with Pete DeBoer, who was let go by the San Jose Sharks earlier this season.

Gallant led the expansion Golden Knights to the Stanley Cup final in 2018, their first year of existence.

The New Jersey Devils also fired their coach, John Hynes, after losing to the Sabres this season.