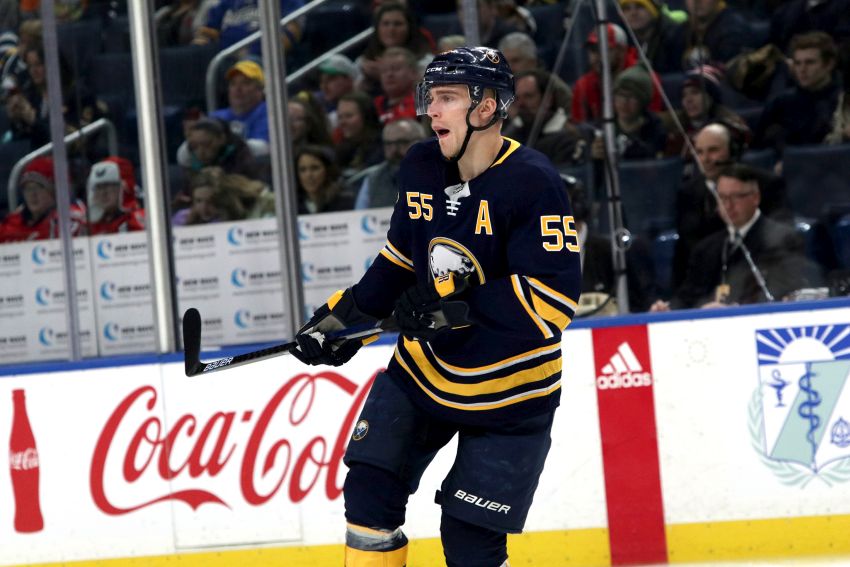 Rasmus Ristolainen sounds like a guy who wants a change of scenery. ©2019, Janet Schultz

BUFFALO – Rasmus Ristolainen rarely says much. On a good day, if you see the Sabres defenseman, he might answer a question by offering a couple vanilla sentences.

So if Ristolainen talks to the media today after training camp opens, we probably won’t learn much about his conversations with the Sabres over the summer or how he spent the last five months.

Does Ristolainen, 24, feel like he needs a change of scenery? Did he request a trade during the offseason? How were his chats with new coach Ralph Krueger?

Ristolainen, whose frustrations have been evident, will likely offer short replies.

The constant losing the Finn has endured over his six NHL seasons has clearly taken a huge toll on him.

Just his presence in town – he attended the team’s annual golf tournament Tuesday – is a little surprising. At times over the spring and summer, it felt like he would be dished.

When the Sabres cleaned out their lockers inside KeyBank Center in April, Ristolainen sounded beaten down by his experiences playing for one of the NHL’s laughingstocks.

“These six years, they’ve been the most difficult mentally,” he said then.

In June, the Sabres traded for right-handed defenseman Colin Miller, a sign Ristolainen’s tenure could be ending.

Then last month, Ristolainen told Finnish television network MTV Sports, “I cannot say anything other than the fact that on the 12th of September, (I will be at) one of the NHL team’s training camp,” according to a Google translation of the interview.

That, of course, sounds like a guy who wants out.

Yes, Ristolainen has his flaws. He compiled an NHL-worst minus-41 rating last season.

But the Sabres sorely need his talents. General manager Jason Botterill simply can’t trade him for the sake of it. No one else on the blue line gobbles up more minutes and produces more offense.

Perhaps another new coach – Krueger is the Sabres’ fifth since Ristolainen’s NHL debut – and a smaller role will unlock more of his potential.

The increased depth on the blue could help Krueger trim a few minutes off Ristolainen’s night and put him in better positions to succeed.

Here are more stories to follow throughout training camp:

Right now, the Sabres have a surfeit of skaters. Twenty-four forwards and 15 healthy defensemen on NHL contracts are listed on the training camp roster they released Wednesday.

That, of course, is good for a team that has been light on depth for, oh, about eight years. Roster competition is healthy. They must foster more than they had in the past.

Teams usually keep 13 or 14 healthy forwards and seven or eight defensemen, meaning a veteran or two will likely be waived or traded before camps ends.

“We’ve shown in the past just it hasn’t been lip service, it’s been with our actions,” Botterill said of keeping a youngster over an established player. “If players knock out veteran players, they’re going to have the opportunity to be here. That’s what we’re going to be looking for.”

“We’ve talked a lot about our returning players, challenging them to be ready to go right away, because we want to bring more players in to have more success as an organization. I think the competition is going to be great in the next couple weeks and I think you probably hear it in Ralph’s voice, he’s excited about getting things going.”

While Botterill said Monday he doesn’t expect top pick Dylan Cozens, 18, to crack the NHL as an 18-year-old, they plan to give him opportunities.

There are other guys to watch. To wit:

– Winger Victor Olofsson 24, is expected to stick in the NHL following a rookie season in which he scored 30 goals in the AHL and forced his way up to Buffalo for a six-game look.

– Winger C.J. Smith, 24, must clear waivers if the Sabres want to send him back to Rochester, where he just enjoyed two standout seasons. Given his terrific production with the Americans – 45 goals and 102 points in 119 games – Smith would likely be claimed.

– A strong camp could help center Rasmus Asplund, 21, grab a spot on the third or fourth line.

– Defenseman John Gilmour, 26, isn’t considered a prospect, but he just enjoyed a monster 20-goal, 54-point season with the AHL Hartford Wolf Pack. Gilmour has 33 games of NHL experience with the New York Rangers.

With defensemen Zach Bogosian and Lawrence Pilut still recovering from offseason surgery, an impressive camp might help Providence product could grab a spot. Ditto for defensemen Will Borgen, 22, and Henri Jokiharju, 20.

What do the Sabres do with Vladimir Sobotka?

Sobotka, 32, was downright awful most of last season. For $3.5 million, the Sabres received five goals, 13 points and a minus-20 rating over 69 games. After a solid start, the Czech forward endured a three-month goal drought.

It’s hard to imagine the Sabres keeping Sobotka if he struggles again.

If they cut ties, where would they send him? Rochester would likely be out because he would take ice time away from prospects. The Sabres could loan him to another AHL team or a European team.

Krueger’s first camp promises to be interesting, He spent one abbreviated season as an NHL coach seven years ago. He last coached in 2016 at the World Cup of Hockey. He spent the last five years running an English soccer team.

How does he operate? What kind of style does he embrace? Which players does he like?

Notes: The Sabres have 52 players – 28 forwards, 18 defensemen and six goalies – on their camp roster. … The Sabres have invited center Kyle Olson, a standout during the Prospects Challenge rookie tournament, to camp. … Veterans undergo their physicals today. The first on-ice sessions are Friday.