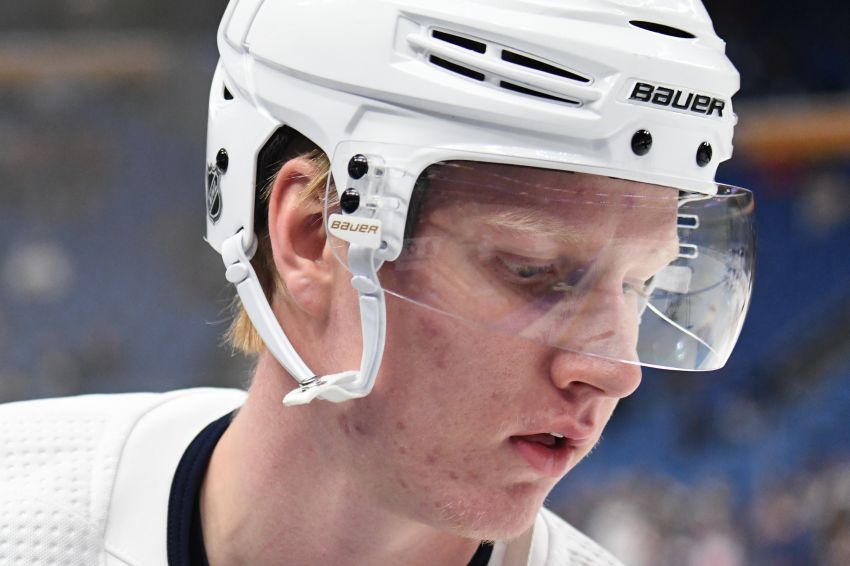 Missing out on the NHL’s qualifying tournament ticks Rasmus Dahlin off. ©2020, Micheline Veluvolu

As the COVID-19 pandemic forced much of the world into quarantine, Sweden remained open, offering Rasmus Dahlin an opportunity to hone his skills on the ice as most NHL players stayed in their homes.

“I’m working on my shot almost every day,” the Buffalo Sabres defenseman said on a Zoom call May 27. “That’s my main thing right now, my shot.”

Dahlin, of course, already possesses a terrific shot. Still, he believes it can improve, so he has spent the last few months revamping it.

“I’ve been shooting like I did when I was 10 years old,” he said. “I’m switching up a couple of things, and hopefully it will work out. I (feel) that I shoot harder now. It’s a lot of small things (I’ve been working on).”

Dahlin, 20, wouldn’t reveal any other details.

“I can’t tell all my secrets,” he joked.

The sour taste Dahlin’s second NHL season left has helped buoy his offseason workouts. In addition to the on-ice work, he said he has been adding muscle to “take care of my own zone better” and be “stronger in the corners.”

Months after returning home, Dahlin still hasn’t gotten over the Sabres’ sorry season. They finished 25th overall, falling one win short of cracking the 24-team playoff qualifying tournament the NHL plans to utilize if it can resume its season.

“I’ve been reflecting pretty much since I came home here in Sweden, and especially now that we couldn’t make the 24 best in the league,” Dahlin said. “It’s tough … to be here when all my Swedish buddies are going back and playing and I’m staying home here. It (ticks) me off a little bit actually to not play now.

Dahlin quickly established himself as one of the NHL’s dynamic young talents in 2018, making an immediate impact after the Sabres drafted him first overall.

The 84 points Dahlin scored over his first two seasons rank second to Sabres legend Phil Housley, Dahlin’s first coach, for most points recorded by a teenage defenseman in league history.

This season, however, Dahlin struggled at times early, often when he tried to do too much. He regularly looked like a defensive liability.

Dahlin was expected to build off one of the greatest rookie campaigns by a defenseman in NHL history and help the Sabres take their next step toward that elusive playoff berth.

It took Dahlin time to earn coach Ralph Krueger’s trust. By mid-November, it felt like Krueger might scratch him. On Nov. 16, Krueger benched him for the final period of the Sabres’ 4-2 win over the Ottawa Senators.

A scout who has watched Dahlin regularly for two years said the youngster lost his confidence early in the season.

Then on Nov. 25 in Tampa Bay, Lightning defenseman Erik Cernak elbowed Dahlin in the face. Dahlin used the three weeks he spent recovering from a concussion as an opportunity.

He watched games from the press box for the first time, studying the action from high above the ice. He also worked closely with assistant coach Steve Smith and examined video.

“I was reflecting a lot,” said Dahlin, who compiled four goals and 40 points in 59 games this season. “I understood the game a little bit better when I was gone for a while, and I just realized what I was capable of. After that injury, I thought I was playing better, too. I think that injury was pretty good for me.”

Krueger said Dahlin “processed games differently (while) he was injured.”

“His feedback after games was deeper and he was seeing the whole really clearly for me for the first time,” he said. “I believe he probably went one and a half seasons just trying to find his role defensively, his game without the puck, because a player that talented spends his life playing with the puck until he comes to the National Hockey League, and then as a first overall pick, suddenly people target you, you deal with the physicality, which he was never afraid of. …

“He came back and understood the tactic and the strategy better. He simplified his game and brought his brilliance in on a more patient pace and waited for those opportunities, versus waiting on every puck contact he needed to do something brilliant.”