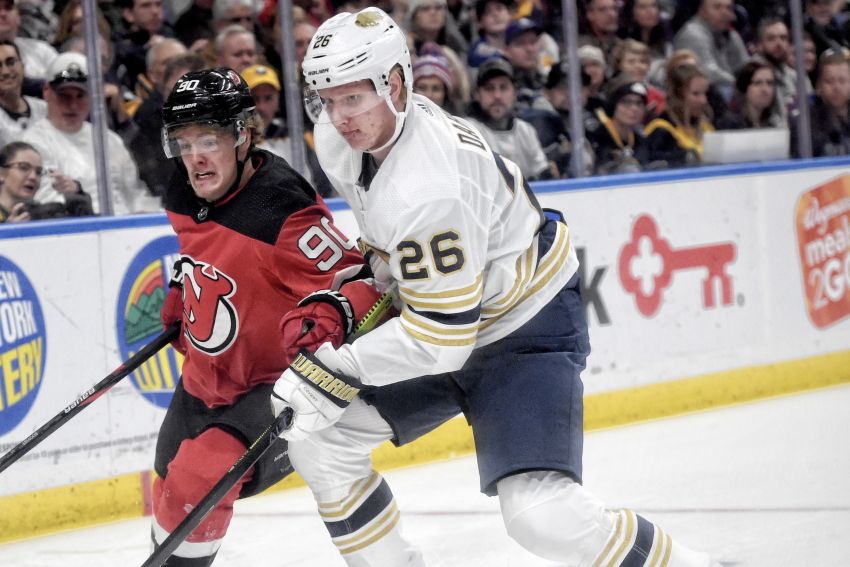 As defenseman Rasmus Dahlin spent month after month packing muscle on his 6-foot-3 frame and honing his skills, coach Ralph Krueger could feel a special transformation was taking place.

Dahlin, 20, possesses the maturity to match his enormous skill set. The Buffalo Sabres’ disappointing finish last season – they missed the NHL’s 24-team playoff qualifying round by one point – irked the Swede and put him in a reflective state of mind.

So Dahlin, who’s beginning his third NHL season, utilized his time at home during the COVID-19 pandemic.

“When I reflected on last season, I wanted to put on some weight, be in the gym, get some more muscles,” Dahlin said on a Zoom call Friday following the first session of training camp inside KeyBank Center. “That was my main focus.”

Dahlin focused so much that Krueger learned the changes he underwent would be seen immediately. He added 14 pounds of muscle. The Sabres now list him at 207 pounds.

“If I look at the strength and the physicality, you will visibly see that in the first skate on the first of January that Dahlin has really used the time properly,” Krueger said Tuesday.

He added: “He is extremely competitive and wants to be a big part of us taking another step.”

A lot must go right for the Sabres to emerge from the stacked East Division and earn their first playoff berth since 2011. If Dahlin keeps developing – many observers believe he will become one of the NHL’s best defensemen someday – they might have a chance.

“In many ways, we need him to grow for us to be able to reach our goals,” Krueger said.

Growth this season, Dahlin said, will be “getting more mature, making the right decision” and showing he can play in both ends.

“My main goal is the coaches can trust me everywhere on the ice,” said Dahlin, the first overall pick in 2018. “It takes time, but it’s a fun process.”

“I also see his hunger to learn the game away from the puck and to take that responsibility defensively that they don’t usually have as they grow up when they have so much skill, a younger player, his amazing skillset,” Krueger said.

Dahlin made an immediate impact as a rookie two years ago, recording 44 points while showcasing his dynamic skating ability. But he struggled early last season, often trying to do too much.

Early in the year, shortly after Krueger benched him for a full period, a concussion sidelined Dahlin eight games. He used the time away from the ice to analyze video with coaches and study games from the press box.

The work paid off. Following his return, he looked more comfortable and began building on his terrific rookie season.

“After my concussion, I felt more confident on the ice in both ends of the ice,” said Dahlin, who compiled 40 points in 58 games last season. “So, yeah, it comes with time. I felt more mature.”

The opportunity to play with budding stars like Dahlin, among other things, convinced winger Taylor Hall to join the Sabres. On Friday, Hall said he noticed right away how Dahlin “makes it look pretty effortless out there.”

“Such a big guy that can skate that well and can move that well is pretty cool to watch,” said Hall, who won the 2017-18 Hart Trophy. “I made a comment to someone in line for a drill, it must be a requirement as a Swedish hockey player to be able to move so well out there and to open your hips up so well and be so agile. It’s pretty cool to watch.

“I think he’s a guy that once you see the power play and five-on-five, four-on-four, three-on-three situations, what he can do with the puck, he’s basically a fourth forward out there. It’s going to be really fun to see him take another step and hopefully cement himself in that upper echelon of defensemen in this league.”