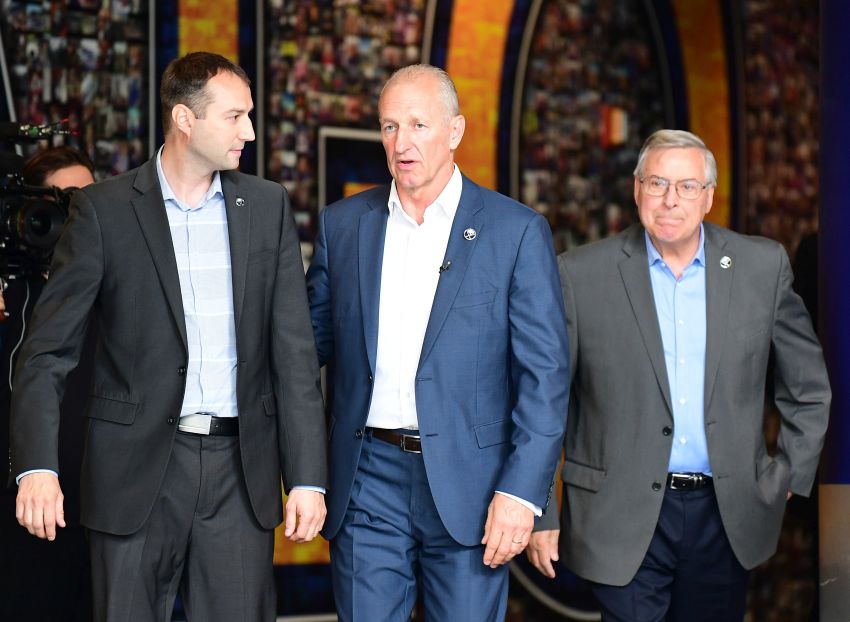 BUFFALO – In the lockout-shortened season Ralph Krueger spent as an NHL coach in 2012-13, teams held abbreviated training camps in January.

So the Sabres coach has never ran a regular big league camp. Almost seven years ago, his Edmonton Oilers quickly convened for a camp that lasted less than a week.

Still, having spent most of his coaching career in international hockey, Krueger, 60, has ran plenty of camps.

“I have a big national team background where camps are just part of life, you’re permanently doing camps,” said Krueger, who coached Switzerland for 13 years.

“I don’t feel anything other than an excitement and a positive energy for the opportunity to have this responsibility in Buffalo,” Krueger said Monday inside Harborcenter after the Prospects Challenge ended.

Krueger’s first camp should begin with frustrated defenseman Rasmus Ristolainen. Krueger said he has been talking to Ristolainen and he would arrive in town later Monday.

The Finn, of course, has voiced his displeasure with the constant losing he has endured over his six seasons in Buffalo and seems to want a change of scenery.

“I cannot say anything other than the fact that on the 12th of September, (I will be at) one of the NHL team’s training camp,” Ristolainen said last month in an interview with Finnish television network MTV Sports, according to a Google translation.

Krueger said it will “be fun to work with a player of that skill and ability.” Ristolainen eats up minutes and has recorded four straight seasons of 40 or more points.

“I have nothing but excitement for working with him,” Krueger said. “I know there’s a lot of potential there that’s still untapped. It’s up to me and the coaches to find out what that is.”

Sabres general manager Jason Botterill said his conversations with Ristolainen have “been positive.”

“Risto’s always been someone who’s come to camp in extremely good shape,” Botterill said. “I think there’s going to be an adjustment for all our players with a new head coach, trying to bring together what coaches want from a systems standpoint with the group. I’m sure those conversations will go well with Risto and our entire team.”

Krueger said he has spent the last month preparing with his assistant coaches to make sure they have their language and teachings down.

Don’t expect center Dylan Cozens, the seventh overall pick in June, to crack the Sabres out of camp.

“It’s always difficult for an 18-year-old to make it in the National Hockey League right off the bat,” Botterill said.

“I just think it’s a big jump for an 18-year-old to step into the National Hockey League and really contribute,” Botterill said. “But we’ll certainly give him an opportunity.

After sitting out Saturday, Cozens returned to the Prospects Challenge lineup Monday afternoon, recording a goal and two points in a 6-4 loss to the Pittsburgh Penguins.

Botterill said defenseman Lawrence Pilut, who underwent shoulder surgery in May, is still recovering and will miss training camp.

“Everything seems to be going very smoothly from that standpoint,” Botterill said. “We hope that he will look to be playing games somewhere around the middle of October.”

After falling behind 4-0 on Monday, the Sabres roared back, tying it thanks to center Rasmus Asplund’s two-goal outburst early in the third period.

The Penguins, however, regained the lead 16 seconds later.