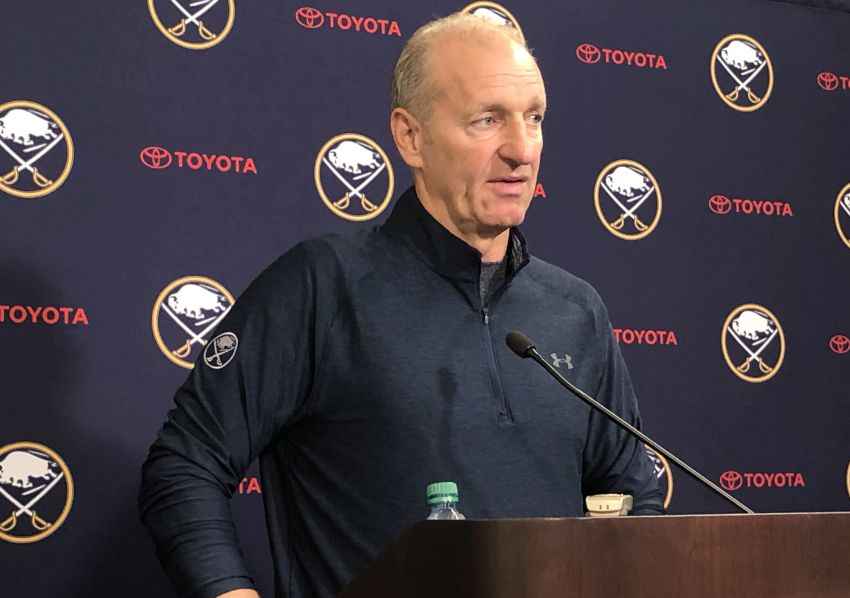 Ralph Krueger is in his first season coaching the Sabres. ©2019, Olean Times Herald

BUFFALO – Six years ago, Ralph Krueger’s job as a consultant for Team Canada’s Olympic entry at the Sochi Games offered the Sabres coach a chance to discuss hockey with some the game’s greatest minds.

“It was the best hockey coaching symposium you could go through with that group because of the way everybody exchanged everything,” Krueger said prior to Wednesday’s 5-4 overtime win against Julien’s Montreal Canadiens inside KeyBank Center.

Having coached Switzerland for 13 years – Krueger led a huge upset of the Canadians at the 2006 Olympics – the hockey powerhouse hired him to prepare for its gold medal defense.

Krueger said Babcock, Canada’s head coach, called a meeting in New York before the Olympics and instructed each staff member to share their hockey knowledge.

“We spent three days doing that,” said Krueger, who had coached the Edmonton Oilers in 2012-13. “What an exchange that was. That’s why you’re going to see traces of everybody’s games showing up all over the place. Probably because of that year we spent together.”

So he couldn’t apply what he had learned with Canada until 2016, when he coached Team Europe to the final of the World Cup of Hockey.

“It was a hockey school that I was a little sad I wasn’t going to use until the World Cup came along,” he said.

“He did a great job for us in prescouting the European teams before the Sochi Olympics,” he said.

Julien pins Krueger’s short tenure in Edmonton on the Oilers’ regime change, not his coaching abilities.

“He proved himself with Team Europe and he’s off to a good start here,” he said. “I’m not surprised he’s an NHL coach again, because he’s a very knowledgeable and capable guy of coaching in this league, and I’m sure he’s going to keep showing it.”

“He’s a very honest, direct coach who tells the truth and doesn’t play any games,” he said.

The Sabres had 12 healthy forwards for the Canadiens, which was enough for Krueger and general manager Jason Botterill.

“At the moment, we’re just going to stay with the group we have,” Krueger said Wednesday morning. “We all know it’s a quick turnaround. We feel comfortable. … Jason and I are speaking about it, but we’d like the group in Rochester to get ready for the weekend.”

The Sabres, who host the Florida Panthers on Friday, begin a three-game road trip next Wednesday in Anaheim. It’s highly unlikely they would travel out west without an extra forward.

Sheary was injured in Monday’s 4-3 overtime road loss to the Columbus Blue Jackets.

Tony Granato recently left his job coaching Wisconsin to be with his brother, Don Granato, a Sabres assistant coach who entered the hospital with pneumonia last week.

“I needed to be there,” Tony Granato told the Wisconsin State Journal. “He had a real bad health scare. He is improving; he’s still going to be in the hospital for a while. But I felt comfortable leaving that he was in a good place that he’s going to be OK. Ten days ago, I didn’t know if he was going to be OK.”

Don Granato has taken a leave of absence from the Sabres, who promoted Amerks coach Chris Taylor to replace him on an interim basis.

Tony Granato has returned to the Badgers.