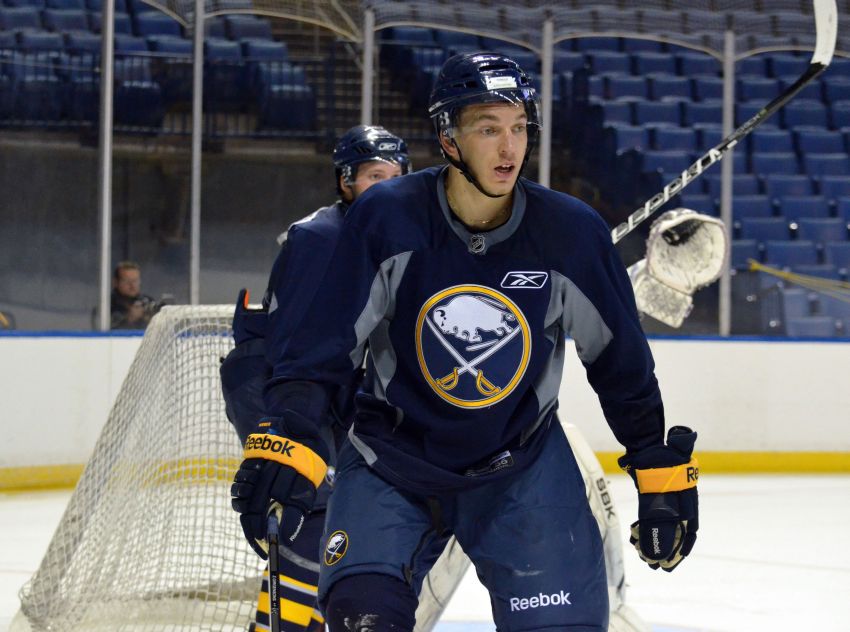 A second later, the tenacious 19-year-old whistled a quick wrist shot past goalie Zachary Fucale’s glove from the faceoff dot, the second goal of his NHL preseason debut.

“I was pretty happy with myself,” Girgensons, who scored short-handed earlier in the Sabres’ 5-4 shootout win, said Monday inside the First Niagara Center. “Probably at the start of last season, the second goal I would’ve put in the netting up there, given a souvenir to a fan.”

The Sabres traded up to grab the Latvian 14th overall in 2012 because the grit, leadership qualities and natural goal-scoring ability he showcased in junior made him one of the draft’s most intriguing talents.

Clearly, Girgensons, the AHL’s youngest player last season, has carried the confidence he developed during a short-but-dynamic postseason into training camp.

“That playoff round gave me a good boost to get my confidence up about what I can do with those other guys around,” Girgensons said. “I think maybe I’m just feeling better about myself.”

Rolston, whose club plays tonight in Columbus, noticed “a lot more purpose” to Girgensons’ offensive game during the playoffs.

“He was kind of playing with other players, playing off them – give and goes, what holes to jump in,” Rolston said. “Where early on it was more open the door and just go around and be physical and do his job. Not as much purpose.

Many had Girgensons ticketed for Rochester again, at least early on. But more outings like Sunday’s could force the Sabres to keep him.

“It just depends how I keep performing,” Girgensons said. “If I play like I did last night, it’s on the coaches to decide.”

Rolston added: “We’re finding out a lot about how his game’s going to go, just how the ceiling is. He keeps moving. He jumped from juniors to Rochester, started out slower in Rochester offensively, built that up. He’s come into camp. He’s showed some early signs of offense.”

That’s no coincidence. Girgensons spent the last few months focusing on his offense.

While the Sabres drafted Girgensons as a center, they believe keeping him on the wing will help him utilize his 6-foot-1, 188-pound frame and create space and make plays.

“The versatility is good, but I think eventually down the road if he’s going to be in our top six, it’s probably more likely that’s going to be at the left wing position than the center position,” Rolston said. “But I think there’s still time to determine that.”

Girgensons drove the net on his first score Sunday. He drove the net again later but was penalized. Rolston didn’t mind the penalty, though.

Many of the players who sat Sunday will play tonight against the Blue Jackets, Rolston said. The Sabres plan to split their goalies for the last time this preseason.