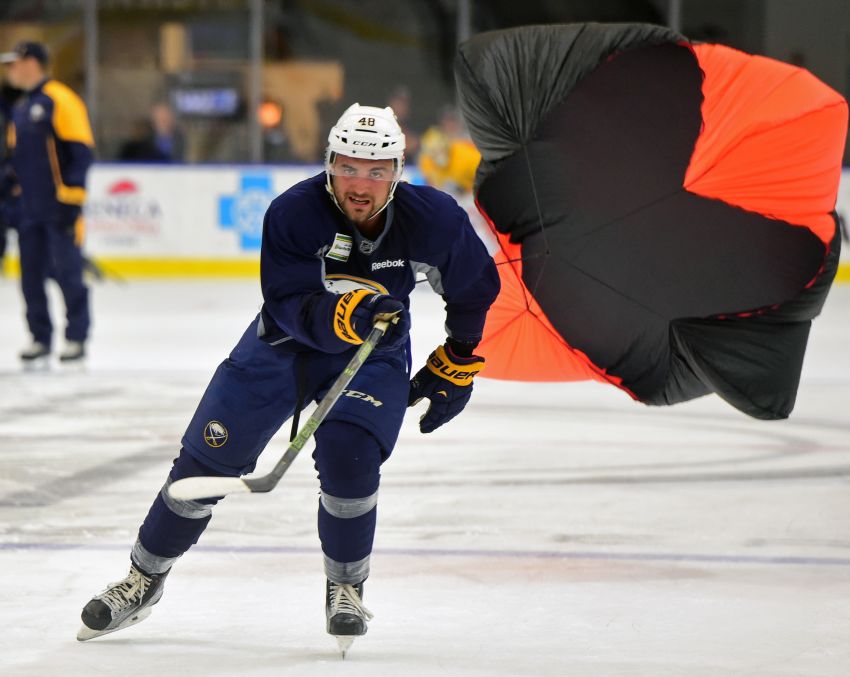 BUFFALO – By around mid-March, it looked imminent. William Carrier, the often overshadowed Sabres prospect, was about to earn his first NHL recall from the Rochester Americans.

In a 21-game stretch, Carrier scored nine goals and 20 points. Before his torrid run, Carrier had compiled only 11 goals and 31 points in his first 94 AHL contests.

“One good game, two good games – it just starts rolling out,” Carrier said Thursday following a development camp session inside HarborCenter. “Confidence is a part of it.”

As the Amerks rolled back into the playoff hunt, Carrier’s confidence soared as the left winger beside center Tim Schaller and Justin Bailey on the No. 1 line.

“We were all big, mobile forwards,” Bailey said.

Then, in the midst of his best streak as a pro, Carrier broke his hand March 23, ending his season.

“I think maybe I would’ve got called up the last few games,” Carrier said.

But Carrier, 21, must feel like he can crack the NHL if he duplicates last season’s success, right?

“I don’t want to think about,” he said. “I think it hurts your game when you think about it.”

Carrier, however, only scored sporadically in his first season and a half in the AHL. Like a lot of other youngsters, he acclimated to the pro game slowly.

“It’s a big step for young boys coming off junior (to get) bigger, stronger,” he said. “So it takes a little time. … Some guys it takes a season, season and a half. So once you get going, I think it’s a fun league to play in.”

As 2015-16 went on, Carrier started building confidence and seeing results.

Through video sessions with former Amerks coach Randy Cunneyworth and other work, he began to understand he could keep the puck a split-second longer and make a play.

“That was a big part of Cunney’s work,” said Carrier, who finished the season with 13 goals, 30 points and a team-best plus-14 rating in 56 games.

Carrier, the 57th overall pick by St. Louis in 2013, is the only player left in the organization from the blockbuster Ryan Miller trade with the Blues in 2014.

Since Carrier’s arrival, others – Bailey, Schaller, who signed with Boston last week, or winger Nick Baptiste – have often grabbed most of the attention.

But if Carrier starts next season the way he ended the last one, he should eventually receive his first NHL action.

“Once you get your chance, it’s an opportunity and you got to grab it and run with it pretty much,” he said. “That’s what I’m doing right now.”