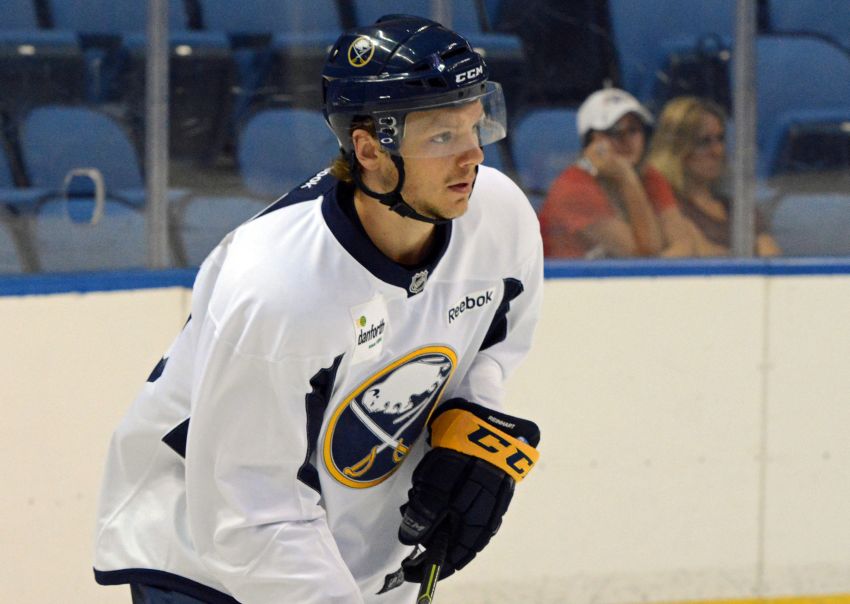 BUFFALO – The hardest part of returning to junior, Sam Reinhart said, was convincing himself to get in the gym and work on his body. The 19-year-old center likes to go all out on the ice. Spending two days before a game lifting weights can make that difficult.

But to succeed in the NHL, Reinhart had to start adding muscle to his 6-foot-1, 185-pound frame when the Sabres sent him back following a forgettable nine-game trial early last season.

So Reinhart, the second overall pick in 2014, found the motivation to do his off-ice work.

“It’s challenging,” Reinhart said Monday following a development camp session inside the First Niagara Center. “I wanted to be 100 percent every day when I went on the ice. But to be able to get in the gym and to be where I was at the end of the year, both on and off the ice, I think was essential for me.”

Everything – “It’s not just one thing I’ve worked on, both on and off the ice,” Reinhart said – has changed.

“It’s been a long year and a long process of getting better and feeling better on the ice,” he said.

Clearly, Reinhart trusts that process. He basically went back to the Kootenay Ice with a checklist for NHL success – thrive at world juniors, get stronger and work on your skating – from Sabres general manager Tim Murray.

So far, he has seen results.

“I feel a lot better just from being on the ice one time than I did last year,” Reinhart said.

A starring role during Team Canada’s run to the gold boosted his confidence. He’s stronger. His skating, he believes, has improved greatly.

Reinhart’s goal, of course, is to be in the NHL again in October.

“That’s been the goal and the expectation for a while,” he said.

If Reinhart makes it, he will have much more talent around him than a year ago.

The Sabres’ offseason moves have given Reinhart more confidence. Adding two centers – they drafted Jack Eichel second and traded for Ryan O’Reilly – will alleviate some pressure on Reinhart. Murray has even mentioned moving Reinhart to the wing.

“I’d be open to anything,” Reinhart said. “I’ve played everywhere, including defense, in my career, so I’m comfortable at any position. I’m not saying that’s going to happen. I’ve played wing a lot.”

He added: “It’s not a strange thing for a young guy to come into the league and have to play wing. I’m prepared for whatever’s thrown at me, and I’m excited for the challenge.”

Reinhart ended last season with one final challenge after his junior campaign ended. In three AHL games, he compiled three points with the Rochester Americans.

While Murray has said he expects Reinhart to make the big club, the AHL could be an option next season.

“I was excited for that opportunity,” Reinhart said about playing with the Amerks. “It allowed me to go into the offseason knowing what the pro game is like. … It was a step up.”