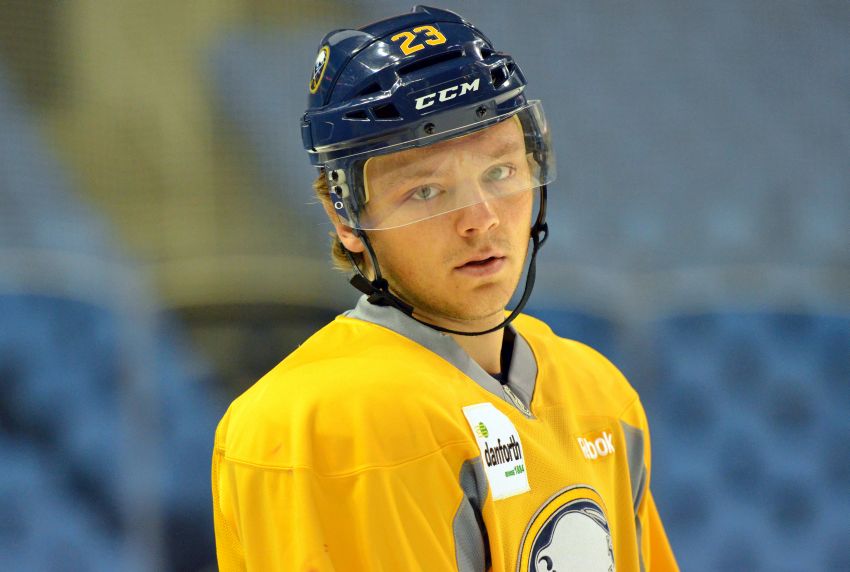 Sam Reinhart was back on the ice this morning. ©2014, Dan Hickling, Olean Times Herald

BUFFALO – Sam Reinhart’s NHL preseason debut wasn’t exactly memorable. In 16 minutes, 53 seconds spread over 19 shifts, the slick center was a minus-1 and compiled zero shots in the Sabres’ 1-0 loss to the Washington Capitals.

But as the game went on Sunday, Reinhart, the No. 2 pick in June, said he felt more comfortable.

“That’s the biggest thing that I’m focusing on right now,” Reinhart, who will play in Tuesday’s preseason home opener, said today inside the First Niagara Center. “Feeling comfortable out there is an adjustment.”

After watching the game on video, the 18-year-old noticed he generated more action around the puck late.

“I think, especially going into the third, the puck wasn’t on my stick as much, but I started getting it more and started creating more in the offensive zone,” Reinhart said. “So I think I would like to build off that a little more.”

Sabres coach Ted Nolan tossed Reinhart headfirst into the fray, making him take a defensive-zone faceoff early. Nolan said the youngster looked “a little tentative as all first-year players would be.”

“But as the game went on, I thought he got more comfortable,” he said. “He was a little bit more loose on the bench. I believe in putting the kids in the fire right off the hop. (Don’t) put the kiddy gloves on him, walk him through it, hold their hands. We’re in a man’s game now.

“Put him out, and there’s no better place than a defensive zone draw your first shift against one of the experienced guys in the league.”

“I think just the pace and overall size of the guys, that’s obviously the biggest thing coming in, making an adjustment,” Reinhart said. “I think for me it’s just kind learning to use my strength all the time.”

The Sabres will dress an experienced lineup with more veterans Tuesday against the Carolina Hurricanes, Nolan said. Most of the older players will then sit out until the final exhibition contests.