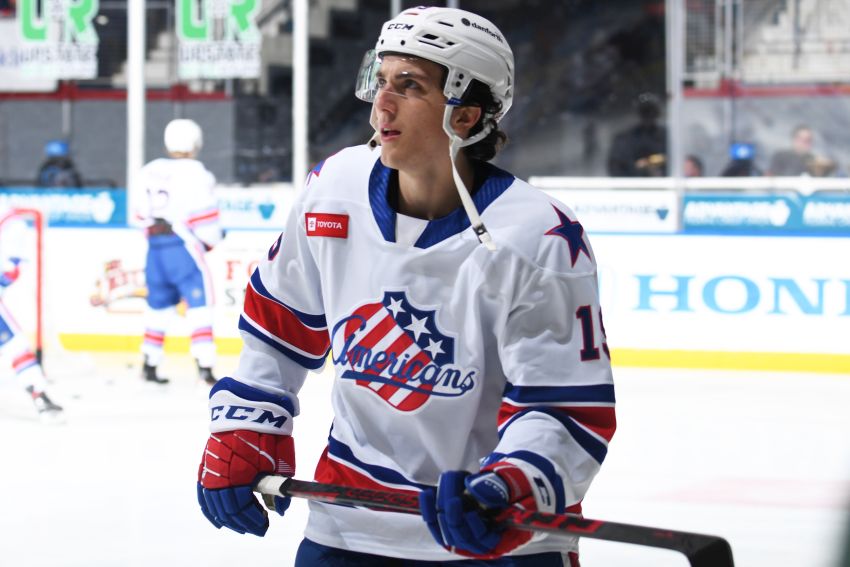 Wednesday’s overtime goal was just Krebs’ third shot on goal in the last four games. The winger, however, had recorded a whopping seven points in the last three contests entering Friday, six of them assists.

Amerks assistant coach Michael Peca, who subbed for coach Seth Appert against the Utica Comets, said the staff has told Krebs, 20, to shoot more often. He has registered just 20 shots in 16 AHL games this season.

“Sometimes when you’re a passer by nature, you’re always going to look pass first,” Peca said following the Amerks’ 4-3 win inside Blue Cross Arena. “But he’s scored some big goals for us, too. And I think the more confidence he gets putting the puck in the net, I think you’ll see him become a little bit more of a shooter when he needs to.”

Krebs, who arrived Nov. 4 from the Vegas Golden Knights in the Jack Eichel trade, said he has always possessed a pass-first mentality.

“Ever since I was young, I loved moving my puck,” the rookie said.

Krebs, who played 13 games for the Golden Knights over the past two seasons, understands he needs his shot needs to become a major asset.

“I’ve been working on my shot every single day in the shooting room,” said Krebs, a center the Amerks recently shifted to left wing. “It’s something I want to add to my game. I think, in the NHL, the goalies are so good you got to be able to rip it. It’s definitely paying off, the work I’m putting in.”

Krebs, the 17th overall pick in 2019, has adjusted to the Amerks quickly, registering two goals and 10 points in 11 games entering Friday’s contest against the Laval Rocket. He compiled one goal and five points in five outings with the Henderson Silver Knights, Vegas’ AHL affiliate, earlier this season.

Malone, who centered Krebs and JJ Peterka on Wednesday, said Krebs’ work ethic has impressed him.

“Sometimes you have these young guys and they’re first-round picks and they think things should be given to them,” Malone said. “But you can tell the way he skates, he’s motoring, his feet are always moving and he gets back, plays a two-way game.”

While Krebs has been on a tear, he’s still raw. Peca said he forced plays early in Wednesday’s game instead of driving down in the offensive zone.

“He’s going to continue to improve in those areas,” Peca said. “I mean, he is an incredibly intelligent hockey player. He does see things at a high level. He’s able to put pucks into areas a lot of players can’t, even at the next level. So he’s a fun project to work with but he’s still certainly learning the game as well.”

Amerks forward Arttu Ruotsalainen, who made the Sabres out of training camp and played 16 games, made his AHL season debut Wednesday, pumping a team-high seven shots on goal.

Ruotsalainen hadn’t played a game since Nov. 24 and appeared to get stronger as the contest progressed.

“You can tell that he was still just figuring out a little bit, new voices on his line, trying to figure out those voices, using his voices with his linemates,” Peca said. “I think he’s going to be an impactful player for us. He’s a leader, he plays with a tremendous amount of grit and he’s got a tremendous amount of skill.”

Ruotsalainen, 24, mostly played center this season before the Sabres sent him down Nov. 28. The Finn skated at left wing beside Brandon Biro and Mason Jobst against Utica.

“He does have a great attitude and he’s always kind of Arttu Ruotsalainen, like he’s his persona and the guys actually do love having him around,” Peca said.

Ruotsalainen compiled five goals and 13 points in 13 games with the Amerks last season.