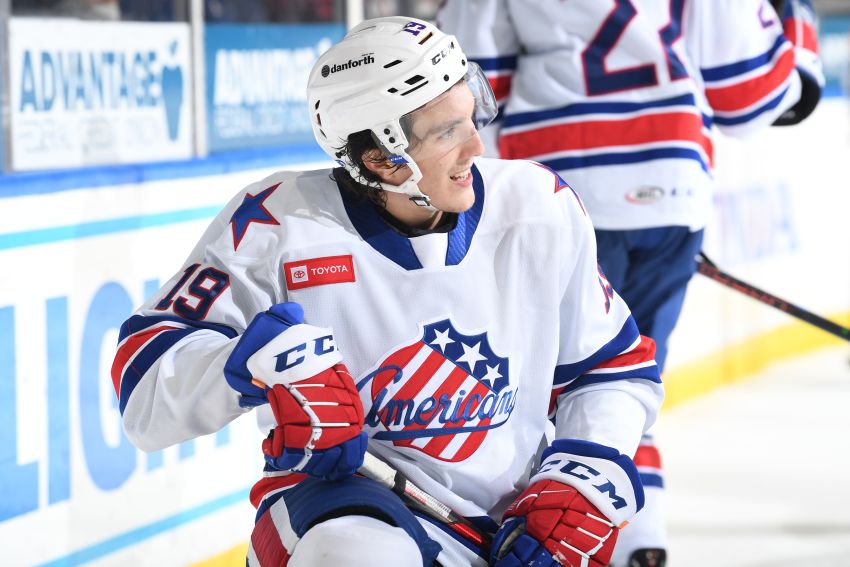 Peyton Krebs likely won’t play left wing for very long. The Buffalo Sabres still envision the prospect as a center in the future.

But for the time being, Rochester Americans coach Seth Appert wants to keep Krebs, 20, in the spot he moved him last Friday.

When Appert shifted Krebs beside center Mark Jankowski late in the Amerks’ 5-4 shootout win over the Lehigh Valley Phantoms, he noticed the rookie and veteran shared natural chemistry.

So Krebs has stayed at left wing, a position he played this season prior to his Nov. 4 arrival from the Vegas Golden Knights in the blockbuster Jack Eichel trade.

“We see him as a center long-term, but right now, more importantly, just keep building his game and having him in positions to be successful,” Appert said.

Why is Krebs a strong winger? Appert said his calmness and vision make him effective in “hard zones” along the wall. Playing there also opens up space.

“It gets him out on the forecheck and out on the transition a little quicker,” Appert said.

Appert, of course, wants to help Krebs acclimate to his new surroundings. While Krebs played just 13 games with Vegas, he grew up in the organization over the past two and half years. He probably envisioned a long career in the desert.

“Definitely a bit of a shock at the start,” Krebs said of getting dealt.

“In 10 years from now when you look back, you’re going to say that was a really good move for me,” Krebs said. “You just got to make sure to stick with the process and really keep working each and every day. Obviously, you create some good relationships back with your old team and you never think you’re going to get traded from there, but it’s exciting to meet some new people here.”

Through eight appearances with the Amerks entering Friday’s game, the 6-foot, 185-pound Krebs had compiled one goal and three points. He scored his first goal this season, a power-play tally, in last Saturday’s 5-3 loss to the Utica Comets.

After Krebs one-timed winger Jack Quinn’s cross-ice pass in the right circle, he celebrated by going down on one knee and fist-pumping.

“To finally get one in is a breath of fresh air, for sure,” Krebs said. “I’d say I was probably just as excited as I was just relieved.”

Appert understands Krebs needs time to get accustomed to his new surroundings and teammates.

“Trust comes through time together,” Appert said. “It just isn’t earned in one day.”

Krebs said he has been growing more comfortable around the new faces.

“But playing I’m still trying to get my groove going here and get things working,” he said. “It’s been mentally a little bit harder. I mean, whole new systems and whole new coaches and just trying to get that all figured out.

“But the group here in Rochester and the coaching staff has been really good, actually been unreal. They’re great people and they only want the best for you.”

PEYTON KREBS SCORES HIS FIRST GOAL AS AN AMERK! pic.twitter.com/lnlSePLbGu