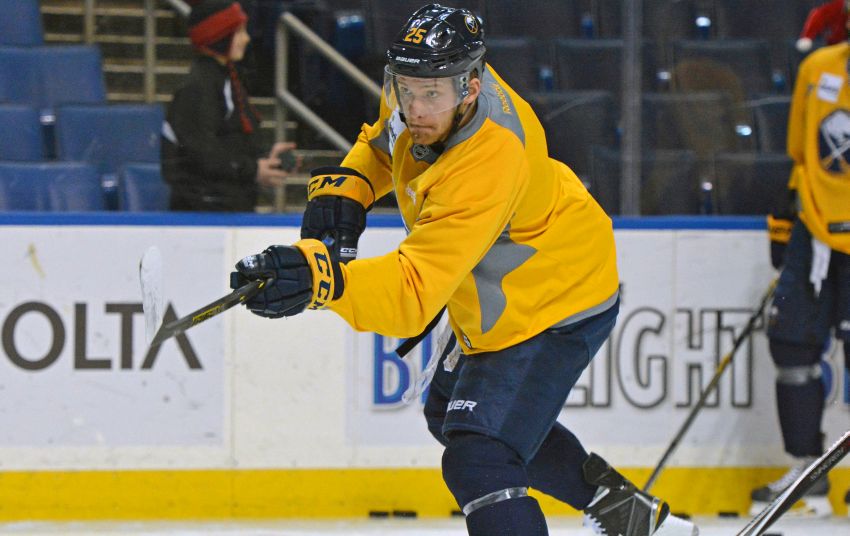 BUFFALO – Mikhail Grigorenko knew the Sabres were short one forward and had the Colorado Avalanche, a team led by Hall of Fame goalie Patrick Roy, his former junior coach, coming up on the schedule.

Grigorenko, who played in Tuesday’s 5-1 loss in Winnipeg before going back to Rochester, wanted to get recalled again badly. To his relief, the Sabres summoned the Russian again Saturday morning.

“I was hoping I would get called up, especially that game against Colorado against Patrick,” Grigorenko said Saturday morning prior to the Sabres’ 5-1 loss inside the First Niagara Center. “I saw him … at the morning skate. He said, ‘Hi, how are you?’ It was a big smile on my face just to see him. So I’m really excited.”

Later in the day, the Sabres recalled winger Johan Larsson to replace Matt Moulson, who was sent home sick.

Saturday was just Grigorenko’s second NHL game in 13 months. The 20-year-old, the No. 12 pick in 2012, played Friday in Rochester, where he has scored seven goals and 19 points in 29 games.

Following two disappointing seasons in which he shuttled between the NHL and junior, a strong training camp helped Grigorenko get his career on track.

Now, he’s one of the Sabres’ top prospects. Again.

The Sabres used some new lines Saturday. Grigorenko centered Larsson and Chris Stewart. Cody Hodgson moved from center back to the left wing with Brian Flynn and Brian Gionta. Drew Stafford replaced Moulson on the left wing with Zemgus Girgensons and Tyler Ennis.