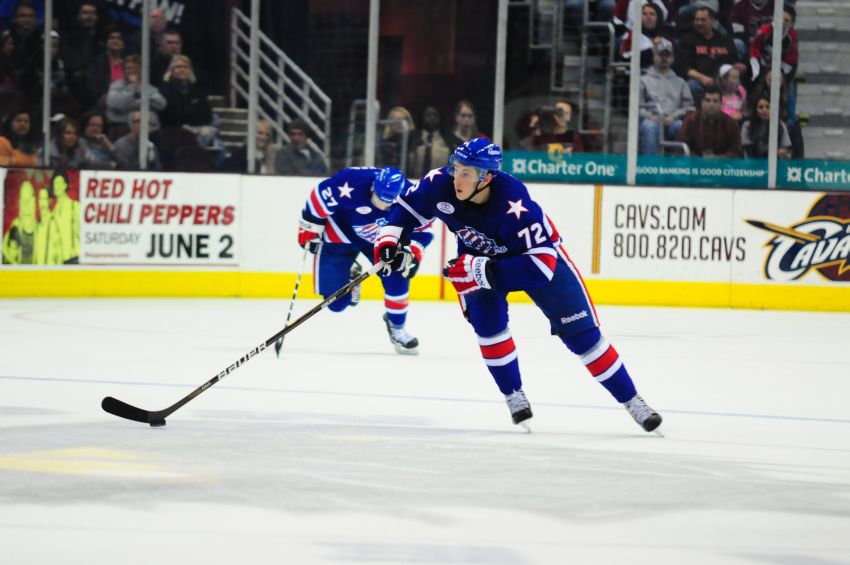 ROCHESTER – Luke Adam, the same Buffalo Sabres prospect whose NHL exploits early this season – three goals in his first four games and 10 tallies before Christmas – made him a Calder Trophy candidate, can’t even score much in the AHL, a league he dominated last year.

Since being demoted to the Rochester Americans on Feb. 11 in the midst of an epic slump, Adam, the AHL’s top rookie a year ago, has only four goals and 13 points in 27 games.

“Right now, his confidence offensively isn’t there,” Amerks coach Ron Rolston said Friday inside the Blue Cross War Memorial. “As soon as he nets one it’s going to change.”

That pivotal, confidence-swaying goal might’ve come Saturday in the Amerks’ playoff-clinching win against the Lake Erie Monsters in Cleveland, when Adam netted the late winner in a 2-1 triumph.

Adam had been showing signs of busting out recently, scoring his first goal in 14 games last week. The 21-year-old thought he could’ve scored three or four goals Friday.

Adam got results last season with Portland, compiling 29 goals and 62 points in only 57 contests. The forward figured he’d regain that soft touch again in the minors.

When injuries created an opening-night roster spot, Adam seized his early opportunities with the Sabres. He had four goals and 11 points in the first 11 games, mostly centering wingers Jason Pominville and Thomas Vanek. He still kept a strong pace after the trio broke up.

He scored his 10th goal and 20th point in his 32nd game Dec. 17 in Pittsburgh, and then hit a wall, enduring 20 straight pointless contests.

“I don’t know. I mean, it’s a fine line,” Adam said. “The team started losing some games. Obviously, the season didn’t go the way they wanted up there this year.”

Sabres coach Lindy Ruff had said Adam wasn’t generating many scoring chances during his hot streak; he was simply finishing the ones he got.

Despite being a healthy scratch twice and experiencing the long drought, the demotion caught Adam off guard.

“It was real disappointing,” Adam said. “I didn’t see it coming at all. When it happened, unfortunately I was a little shocked. But it’s how you handle it.”

“He’s been great,” Rolston said. “His attitude has been outstanding with us. He’s worked really hard, his after-practice work. He’s on the bench talking. He’s been a really good teammate. … He’s playing a good team game right now. So we’re really happy with that progress.”

Still, Adam’s not scoring much.

“I think he’s trying to be too fine in terms of his shooting,” Rolston said. “I think he’s missing the net a lot, maybe trying to pick a spot. At this level compared to the NHL, I think just getting it on net is the key.”

Ruff said Adam would decide how quickly he came back up. Instead, Marcus Foligno and Corey Tropp bypassed him for recalls.

Adam has started playing left wing again recently, a spot he played occasionally with the Sabres. Their dearth of scoring centers helped Adam crack the NHL. But the Sabres have shifted Tyler Ennis to the middle fulltime and also acquired Cody Hodgson since Adam went down.

His future could be as a winger. Right now, though, Adam just wants to think about the current season, one he helped extend.

“I don’t like looking forward,” Adam said. “I don’t want to look toward next season already. But at the same time, there’s no alternative opinion in my mind that I want to play in the NHL next year.”