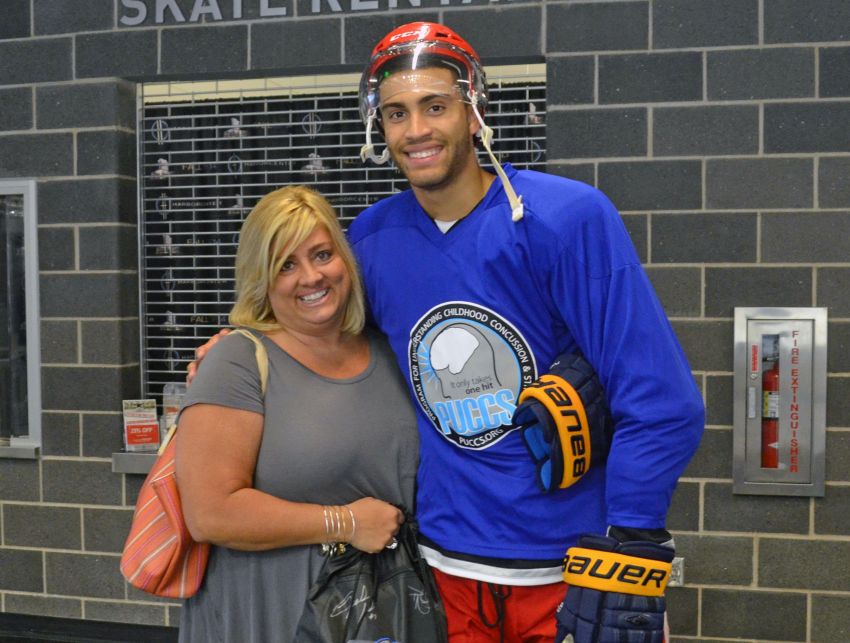 “I cried instantly when he scored,” said Buscaglia, who watched the game at her cousin’s house with five other family members. “Then I screamed and then I cried. We were just jumping up and down.”

As an elated Bailey celebrated in New York’s Madison Square Garden by bending over and pumping his arms, almost 400 miles away in Williamsville, Buscaglia, who raised her Sabres-loving son here as a single mother, said she “felt exactly what he felt.”

“I can’t describe it,” she said. “But it was like this big relief.”

Then her mind flashed back to “Little Justin,” who used to watch “SportsCenter” on ESPN every morning before school.

Bailey’s goal 1:03 into the second period of the Sabres’ 4-1 win against the Rangers was so good – he pounced on an errant pass and beat Rangers goalie Henrik Lundqvist as he fell – it earned a spot on the show’s “Top 10” segment.

The congratulatory messages she received enhanced those special feelings.

“We’re so blessed with so many great people that have been on this journey from when he was little,” she said. “Just reading tweets, you get caught up in all the nice things people have said along the way. It just makes everything kind of come full circle.”

When they finally talked on the phone Wednesday morning, Buscaglia asked Bailey what the goal felt like.

For Bailey, 21, the goal was a huge relief. While the forward prospect had played well at times in the NHL, he didn’t register a point in his first 11 appearances.

The Sabres recalled him again Friday after a torrid stretch of five goals and seven points in five games. To stick in the NHL, Bailey, one of the AHL’s top scorers with the Rochester Americans, must produce goals.

“I’ve had chances in the past,” Bailey told reporters in New York. “I can’t say it hasn’t been on my mind for all of last summer and this year, too. I’m just happy it finally came and I can start to get back to playing the way I play.”

The Sabres play another road game tonight against the Chicago Blackhawks. Buscaglia, who said she’s “really superstitious,” might watch at her cousin’s house again.

“We should leave it the same,” she said.

Top center Ryan O’Reilly, out the last the four games after undergoing an appendectomy on Christmas, joined the Sabres for Wednesday’s practice in Chicago and could return tonight.