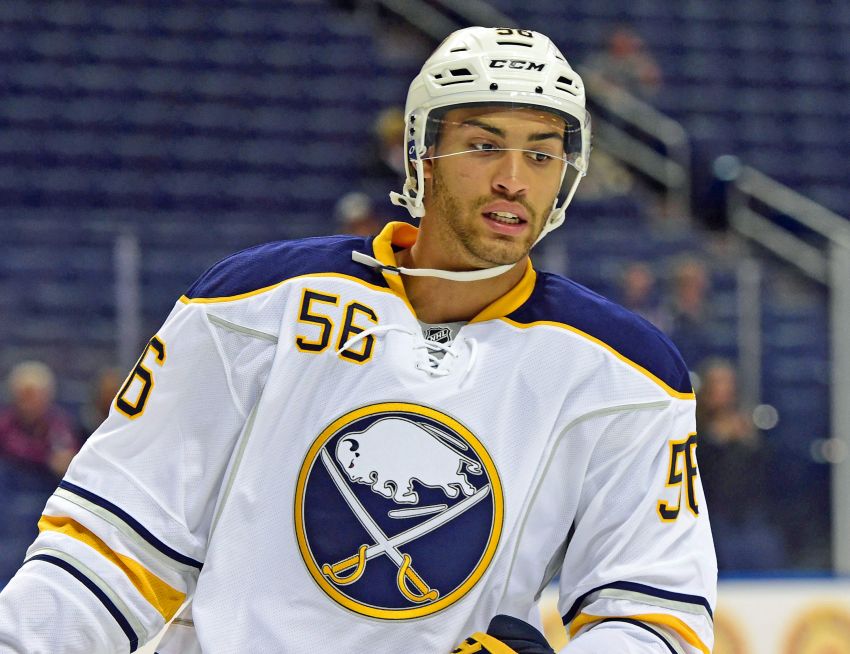 ROCHESTER – Before Americans winger Justin Bailey started his first pro season, he set a significant goal for himself. The Williamsville native wanted to score 20 times, a tough number for anyone, let alone a rookie, to reach in this low-scoring era.

“I think it’s something that in the beginning I strived to accomplish,” Bailey said Thursday inside the Blue Cross War Memorial after the AHL club prepared for tonight’s home finale against the Albany Devils.

After his first month, Bailey, 20, had one goal. At the end of November, he had two. By Christmas, when he had three, he lowered his target.

The 6-foot-3, 206-pound Bailey started rolling in late January and hasn’t stopped. He scored his team-high 20th goal Saturday. In between, the 2013 second-round pick earned his first NHL recall to the Buffalo Sabres.

The prospect has developed rapidly in less than half a season, scoring 15 goals and 32 points in his last 28 games. He became Buffalo’s first AHL rookie to score 20 times since Luke Adam with the Portland Pirates in 2010-11. Bailey’s also the first Amerk to score 20 goals since Adam in 2013-14.

“It was great to get that 20-goal mark last weekend,” Bailey said.

The same youngster who only had three goals in his first 31 pro games now expects to score every outing. He’s also the Amerks’ leading scorer with 44 points.

“Now I feel like I’m seeing the net, I’m finding different ways to score, and now, yeah, when I get that chance I’m thinking, ‘This one’s going in,’” Bailey said.

Like a lot of rookies, Bailey, who scored 34 goals in his final junior season, acclimated slowly to the AHL. Stronger opponents stymied him.

“I felt like I was going into the corner and losing wall battles that I usually didn’t lose,” he said. “You can’t get offense doing that.”

His first 10 games “were difficult” and “a kind of feeling-out process,” he said.

“It kind of reminded me when I went from playing hockey when I was 15 to playing junior when I was 16,” Bailey said. “So I kind of tried to use those things, those experiences.”

“I was pretty frustrated and kind of overthinking,” he said. “Then I came back from (the AHL) All-Star break feeling really good and got rolling, got the call-up. I used that confidence for the rest of the season.”

“Looking back, that would make the season a pretty big success,” Bailey said about reaching the NHL.

While he scored zero points, his play was often noticeable. He received another four-game recall just days after the Sabres returned him.

“When I got called up, I was rolling down here,” he said. “Things were coming easily. I was scoring, I was producing. Then I got called up and I thought I played pretty well, but there was a lot of things that I didn’t know I wasn’t very good at. That really showed when I got called.”

The recalls, of course, helped Bailey hone his game. He mentioned, for example, he no longer struggles getting pucks out of the defensive zone.

To Amerks veteran Matt Ellis, Bailey developed and reached “a point in the season where he saw the National League within reach.”

“Some guys reach for it right away and grab it,” Ellis said. “I think Bails has done a great job. … I joke with him all the time. I say, ‘Bails, make sure you’re a difference-maker.’”