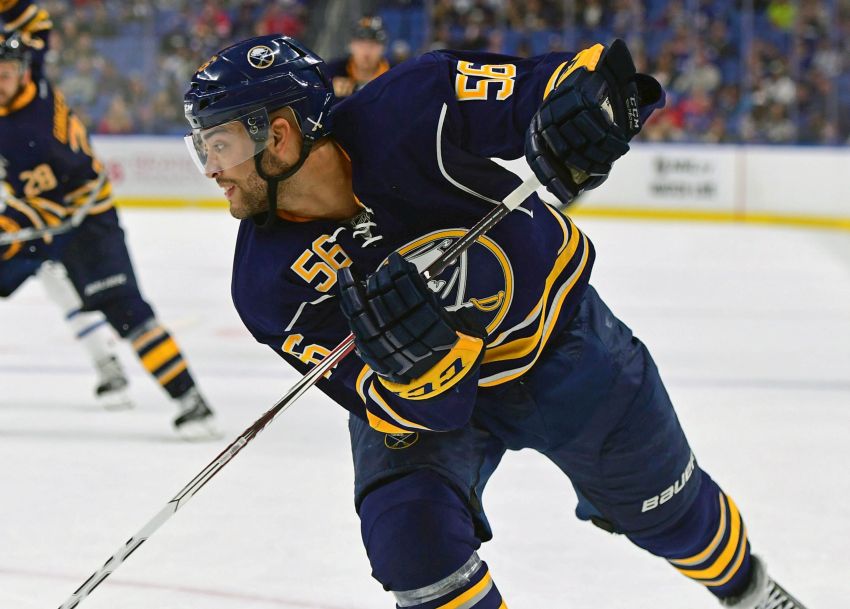 BUFFALO – Instead of being given a spot on a scoring line Friday, winger Justin Bailey, the AHL’s hottest scorer, mostly practiced beside center Derek Grant and Nick Deslauriers, an odd place for one of the Sabres’ top prospects.

Grant and Deslauriers have zero goals and three assists between them in 45 games this season. Incredibly, Grant hasn’t scored a goal in 71 career NHL appearances. Deslauriers has more fights (14) than goals (12).

Bailey, meanwhile, has rattled off five goals and seven points in his last five games with the Rochester Americans, gaudy numbers that helped the Williamsville native receive another recall Friday.

So what gives? What happened to putting prospects in a position to succeed in the NHL?

The message from Sabres coach Dan Bylsma is clear: Bailey, who, it should be noted, is pointless in 10 NHL games, must earn time on a scoring line.

So while the 6-foot-3, 214-pound Bailey might start this afternoon’s road tilt against the Boston Bruins on the fourth line, the second-year pro could earn a promotion.

“He’s got some great speed down the ice, and that’s where he’s got to be effective for us,” Bylsma said inside HarborCenter. “That could be on any line. It could be on the fourth line, or it could be next to Jack (Eichel) for a portion of that time. But that’s something he has to earn with his play.”

Given his torrid stretch, Bailey was the natural choice to replace Carrier. Bailey has 13 goals and 22 points in 31 games with the Amerks.

“I got a little bit of confidence going into the (Christmas) break scoring-wise,” Bailey said. “Lately, I’ve just been clicking. I’ve found some good chemistry with (center) Timmy Kennedy. I’ve felt pretty good and pretty hot down there.”

But Bailey didn’t begin the season hot. Fresh off a 20-goal, 45-point rookie season that included eight NHL games, the 2013 second-round pick was among the first players assigned to the Amerks in training camp.

The Sabres recalled Bailey in early November, but sent him back after two unimpressive outings as a fourth-liner and summoned Carrier.

“Both of those were disappointments,” Bailey said. “I think I’ve been itching to get back up here. … I want to (improve) all the things that got me sent down last time and show them I could do it.”

Working on the details of his game, Bailey said, has helped buoy him recently.

“From training camp to even the first little bit of the season, there’s been a lot of ups and downs,” Bailey said. “I keep telling myself while I’m on this hot streak to remember what this feeling’s like, try to bring that to the rink every single day.”

The key today, he believes, will be building his confidence early.

“Playing simple probably in the first 10 minutes of the game,” Bailey said. “Then once I have confidence playing fast and I’m confident, I’ll be able to go out there and do my thing.”

If Bailey can utilize his size and speed, then perhaps he will move up. Despite having just one NHL goal, Carrier has spent much of his time skating beside top center Ryan O’Reilly.

“There’s a lot of opportunity to be had,” Bailey said. “(Carrier has) done a great job since he’s been up here playing fast and physical and playing simple. For me, whatever my role is, it’s obviously going to be different than Rochester. I need to adjust to that and simplify my game to stay up here.”

Bylsma said: “Will’s the guy who took a hold of the opportunity.”

The reeling Sabres trail the third-place Bruins by eight points for the Atlantic Division’s final playoff spot with three games in hand after Thursday’s loss, a game in which they blew an early two-goal lead.

“I feel a little bit like you would in a playoff series,” Bylsma said. “It’s an emotional game. It was a game we poured a lot into. It’s a huge disappointment losing it the way we did.”

Defenseman Cody Franson said the Sabres must focus on “what we did in the first period” Thursday.

“That was the way we have to play,” he said. “We played smart. We managed the puck well. We put it in the right areas and we had success because of it.”