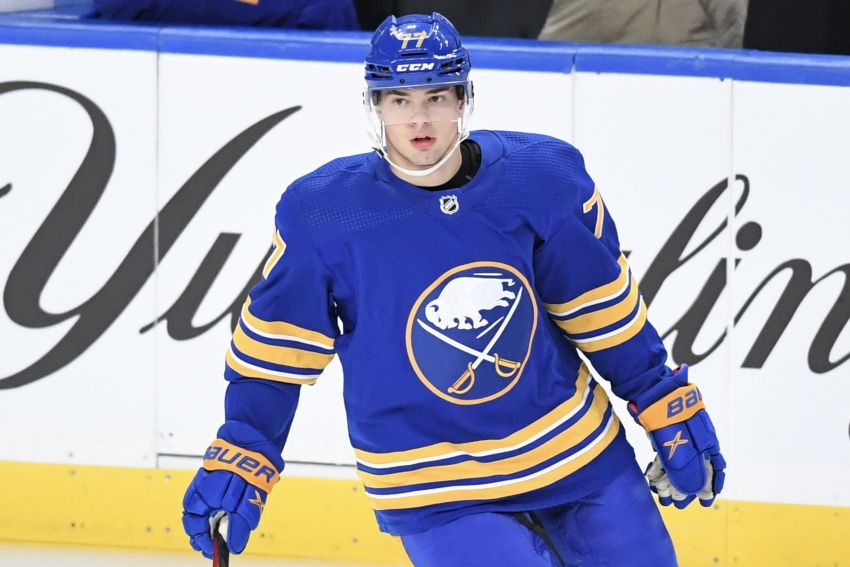 JJ Peterka stayed in Buffalo until the end of training camp. ©2021, Micheline Veluvolu

BUFFALO – After Don Granato told prospect JJ Peterka the Sabres would be assigning him to the Rochester Americans, the coach stopped center Casey Mittelstadt in the hallway and asked him about his 36-game stint in the AHL.

Granato wanted to learn more about Mittelstadt’s surprising demotion two years ago, which turned out to be a turning point in his career.

“He had a half smirk, half smile on his face,” Granato said following Monday’s practice. “He said, ‘It was really good. It was good, important.’ That helped give Mittsy a different perspective. He mentioned right away, lots of ice time, lots of situation time that he wasn’t receiving here in the NHL.

“And it helped him catapult once he got back. We feel similar with JJ right now.”

Peterka, 19, was essentially the Sabres’ final cut before they finalized their 23-man roster Monday. They have 14 forwards, seven defensemen and two goalies for Thursday’s season opener against the Montreal Canadiens at KeyBank Center.

Granato said the 14 forwards all played well enough he couldn’t justify taking a spot away from one. John Hayden and Arttu Ruotsalainen, two forwards on the bubble, made the roster over Peterka.

Granato expects Peterka, a second-round pick in 2020, 34th overall, will be back this season. He said the Sabres will utilize their final cuts during the season.

“These are our final guys,” he said. “We’re going to use them all during the year. JJ will be in that mix, there’s no doubt in my mind. But much as we just said with Mittelstadt, he can get more ice time, more special teams time right now. …

“It’s a different hockey experience for him. We look at that as a tremendous opportunity. We think he will look at it and see it that way and we know Mittelstadt has, as I just mentioned. So it’s all positive.”

“He just keeps getting better,” he said Peterka. “I know … he internalizes what you put in front of him, what you challenge him with. He can go out there and actually work on it immediately in the NHL, which is very impressive for a guy his age.”

Visa issues – players claimed off waivers must reapply for one, according to the Sabres – prevented the Swede from playing in their final two preseason games. He skated in the pregame warm-up Saturday.

The Sabres recalled defenseman Casey Fitzgerald from the Amerks on Monday morning so he could practice with them. They sent him down again in the afternoon.

“I wanted him here today,” Granato said. “We went over some things even before practice that I felt were important, video-wise, meeting-wise, and then practice itself. And we’re not restricted today. Tomorrow we will be.”