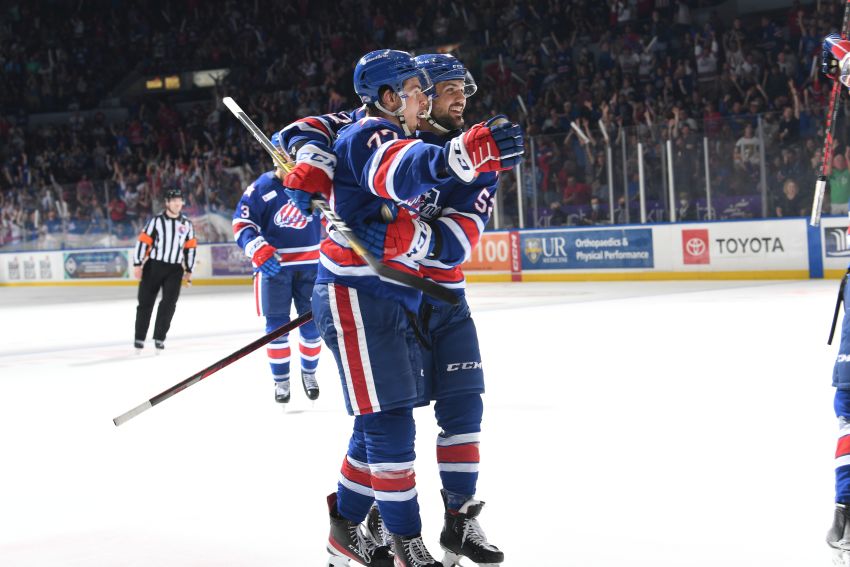 ROCHESTER – JJ Peterka could be one-and-done in the AHL. The Buffalo Sabres prospect just enjoyed the greatest offensive campaign in a teenage season since 1976. Over the weekend, the German winger was the most dynamic player in the Calder Cup Playoffs, recording five points, including a hat trick, in two Americans wins.

After a 28-goal, 68-point regular season, the excitement and pressure that accompanies postseason hockey has helped Peterka transform into a dominant presence.

“It’s like every play matters so much and you do the extra maybe 10 percent out of you,” Peterka said after registering two assists in Sunday’s thrilling 4-3 overtime win against the Utica Comets. “I think that just motivates me to win a Calder Cup here.”

The Amerks can move one step closer to the Calder Cup tonight if they defeat the top-seeded Comets in Game 4 of the North Division semifinal at Blue Cross Arena. They lead the best-of-five series 2-1.

Peterka’s recent exploits have put the Amerks on the precipice of their second postseason series win in two weeks after a 15-year drought.

Overall, Peterka, who turned 20 on Jan. 14, has compiled four goals and eight points in five postseason games. Next year, he could be ticketed for Buffalo, where he played his first two NHL games earlier this season.

Amerks coach Seth Appert said the genesis of Peterka’s offensive surge can be traced to “how hard he’s playing defensively.”

“This isn’t just new, this has been the whole second half,” Appert said. “Now he’s using those legs. He had some great hits on the forecheck tonight. He had some elite backchecks tonight. (Assistant coach) Michael Peca tells him those are his moneymakers, those legs … but they can’t just be moneymakers on offense. If you want to be an elite player here and then the NHL and help your team win, you need to use them for checking as well.

Appert told reporters Monday that captain Michael Mersch is out with an upper-body injury after taking an illegal check to the head from Utica defenseman Robbie Russo late in Sunday’s game.

“Hopefully the league’s looking at that because that was a dirty, predatory hit,” Appert said.

The Amerks scored the game-winning goal on the ensuing power play.

This pass by JJ Peterka is absolutely filthy. pic.twitter.com/vwW8QP9PzB