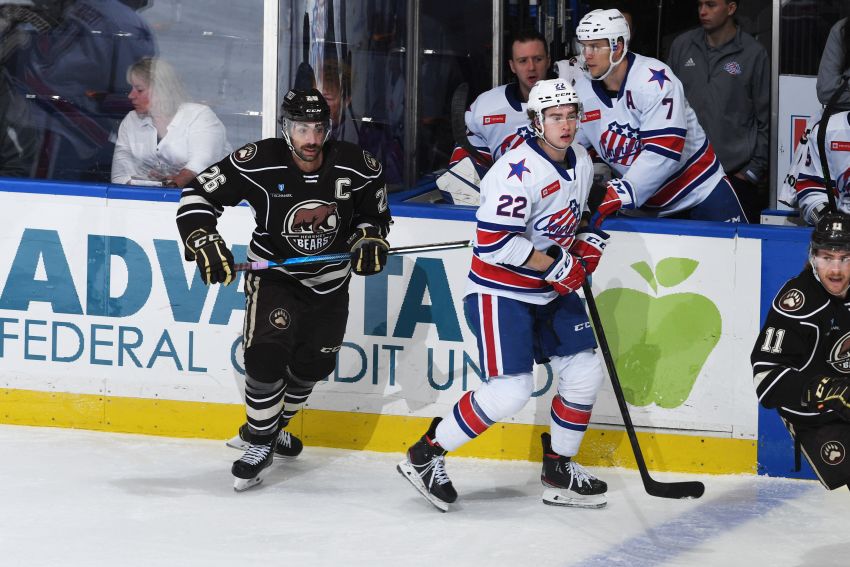 Rochester’s Jack Quinn (22), show here in front of Hershey’s Matt Moulson, is off to a torrid start this season. ©2021, Micheline Veluvolu

BUFFALO – Sabres prospect Jack Quinn, who’s off to a torrid start in the AHL, has tested positive for mono and will be sidelined until after Christmas, Rochester Americans coach Seth Appert said.

“It’s certainly unfortunate knowing how well he was playing, but knowing Jack, he’ll come back strong from this,” Appert told the team’s website.

When Quinn, 20, missed two games last week, the Amerks said he had the flu.

Quinn, the eighth overall pick in 2020, has quickly morphed into one of the AHL’s most lethal scorers, compiling 11 goals and 24 points in 17 games this season. The rookie winger ranks third in goal scoring and fourth in points.

Sabres coach Don Granato said about a dozen teenagers he coached at U.S. National Team Development Program had no trouble recovering from mono.

“I’ve had numerous players on the National Team, guys that are sprinkled all over the NHL, I’ve seen it run rampant at that level with the National Team kids and no problem,” Granato said following this morning’s practice at LECOM Harborcenter. “The doctors are on it and the dozen cases that I saw there in only so many years it was never a problem. So I don’t worry about Jack at all. He’ll be ready.”

The Amerks begin a four-game road trip Tuesday against the Charlotte Checkers.

Appert, who missed two games last week while in COVID-19 protocol, has rejoined the Amerks.