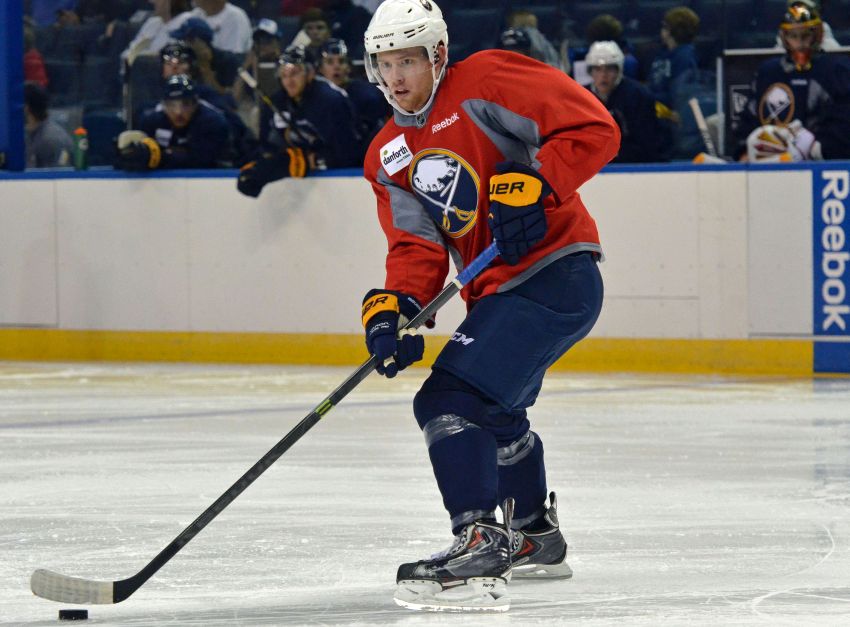 “I threw it on the ground,” a smiling Compher said. “I didn’t want to see that out of his suitcase again.”

Before that, the friends played together in the U.S. national development program.

Compher’s always going at opponents. Even off the ice, the 19-year-old winger’s a supreme agitator and competitor.

“That’s my game,” Compher said last week inside the First Niagara Center. “I like to play hard and compete at everything I do. Sometimes it’s an agitating type of role. I just try to win at whatever I’m playing at.”

He added: “I don’t tend to make a lot of friends when I’m on the ice.”

That competitiveness has always been part of Compher, “whether it’s playing PlayStation against my friend or a hockey game,” he said.

“I just always wanted to win at everything,” he said. “Luckily, it carried over into my hockey game. It’s been one of my best assets.”

Rochester coach Chadd Cassidy, who ran the camp, recruited Compher to the U.S. program before leaving with former Sabres coach Ron Rolston to coach the Americans. Back then, his game possessed “a lot of sandpaper,” Cassidy said.

“His talent level was good but it’s not great,” Cassidy said. “A lot of what he does is based on work ethic and tenacity, and you see that every time he plays out there.”

That tenacious style has elevated Compher, who’s only 5-foot-11 and 190 pounds, into one of the organization’s top prospects. The Sabres moved up and used Carolina’s pick to select him 38th overall in 2013.

“I just think anything you can do on the ice or get a team off their game or win the game yourself, every little bit helps,” Compher said. “I’m obviously not as skilled as Mikhail Grigorenko, but if I can play against and get a hit on him, get in his face a little bit, hopefully he thinks of me a little bit when he’s playing and I can get him off his game a little bit.”

“I like to think I do have some skill to go along with my compete,” said Compher, who had 11 goals and 31 points last season.

Right now, Compher’s committed to Michigan. He’s already an alternate captain, a notable honor for someone months removed from his freshman season.

Before Compher goes back to school, he’ll be skating at Team USA’s world junior camp next month in Lake Placid. Fasching, defenseman Anthony Florentino and centers Connor Hurley and Sean Malone are the other Sabres prospects participating.