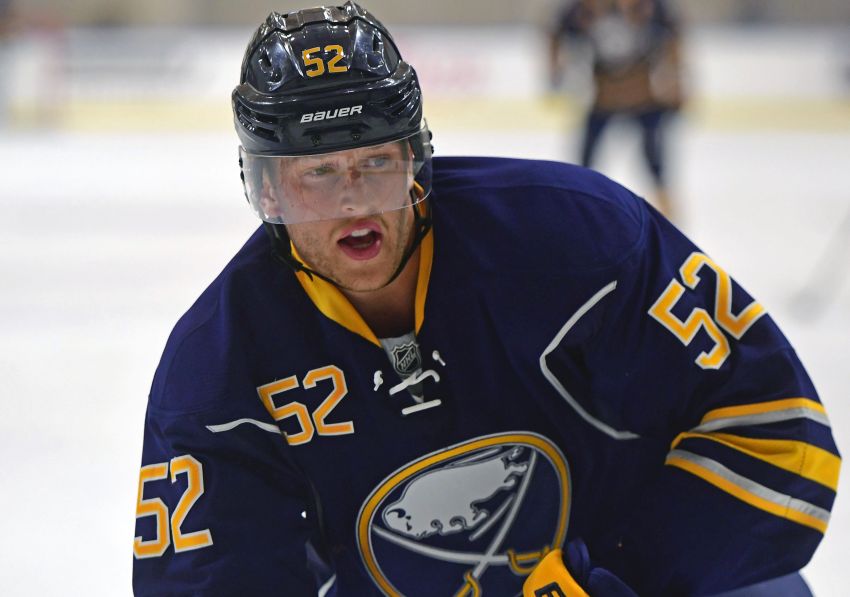 BUFFALO – Rookie Hudson Fasching applied a hockey philosophy to his schoolwork when he returned to the University of Minnesota in April following a seven-game stint with the Sabres.

Fresh off his first NHL action, Fasching, 21, had two and a half weeks to complete the semester and his entrepreneurial management degree before leaving school to represent Team USA at the World Hockey Championship in St. Petersburg, Russia.

“I was like, ‘OK, I’m just going to grind it out here. I’ll be done with it,’” Fasching said Monday inside HarborCenter. “Luckily, my teachers were helpful and they worked with me.”

The affable Fasching, who kept up with his classes online in Buffalo, said he “crammed everything in.” Professors allowed him to take his exams at different times, so he skipped finals week.

The time in Russia, he said, was another stage of his maturation from a scorer into a two-way forward.

“It was incredible,” Fasching said. “It was really cool to represent your country at the next level. It was definitely a weird experience. I was definitely one of the younger guys on the team.”

“I was like, ‘Oh my goodness,’” he said. “It was such a whirlwind and a lot of just tremendous experiences. It was really cool and I was really happy for it.”

Those experiences should help Fasching when training camp opens Friday. Still, the chances of the power forward earning a roster spot right away might be slim. Only one place appears to be available on the fourth line.

Fasching mostly played right wing Monday beside center Alexander Nylander and Nick Baptiste in the Sabres’ 4-3 loss to the Boston Bruins in the final Prospects Challenge game, the end of rookie camp.

The Sabres might want Fasching to develop in the AHL instead of playing short minutes on a non-scoring line. Remember, he generated little after scoring minutes into his NHL debut March 26.

“There’s not much I don’t like about his game,” said Lambert, a Buffalo assistant last season. “He’s really good at protecting pucks down low. He plays hard. He plays his position. He’s not worried about impressing anybody. It seems like he just does his job every shift. Whenever you see that, you know good things are in store for him.”

Fasching believes a simple view of the NHL will help him succeed.

“I think the biggest part is … this is hockey,” he said. “There’s different guys, a bigger spotlight, there’s all this other stuff. But if you break it down to its basic core, it’s just the same game. I think if I can remember that, it’s one of the biggest takeaways for me.”

Down 4-1, the Sabres staged a late rally, getting goals from Nylander and defenseman Brendan Guhle.

Nylander, the eighth overall pick in June, struggled throughout the challenge games. After he cut to the slot and showcased his soft hands by roofing a shot under the crossbar, he looked relieved celebrating the goal.

“It was good to get the first one out of there,” said Nylander, who assisted on Guhle’s goal.

Lambert, who coach the games, said “you could tell that he was a frustrated young man.”

“I’m sure it felt good for him to score that goal,” he said. “Then you saw his ability to pass the puck on the other goal. There’s no doubt the skill is there, but skill needs to work.”

Nylander, a regular winger, will likely go back there again, Lambert said.