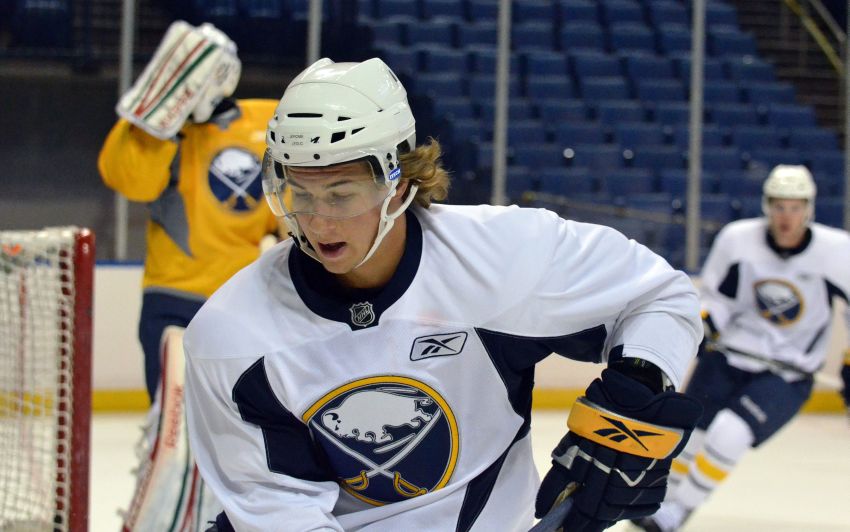 BUFFALO – Jerome Gauthier-Leduc was scoring goals from everywhere. The slick Rimouski Oceanic defenseman utilized his deadly accurate shots from the point. He used his teammates as screens perfectly. He pinched in as the extra man on the rush.

By October, the Sabres prospect had a goal in eight straight games, a new QMJHL record for defensemen.

“He’s a flashy guy,” said former Sabres defenseman Philippe Boucher, Rimouski’s general manager. “He likes to carry the puck. He likes to make a lot of good offensive plays that not a lot of players are able to do, at least in junior.”

The 19-year-old, picked 68th overall in 2010, compares himself to Sabres defenseman Christian Ehrhoff, whose brain he plans to pick during training camp.

“I like to carry the puck, shoot a lot,” Gauthier-Leduc said earlier this week following a session of summer development camp inside the First Niagara Center.

But like many offensive-minded blueliners, his defense can be suspect.

“I have to get bigger and stronger, and I’m still working on my defensive game,” said Gauthier-Leduc, who’s 6-foot-2 and 194 pounds.

Showcasing the same gung-ho style professionally in Rochester next season will inevitably bite him.

“I think he’s going to realize by himself that he needs to work on his defense and things like that,” Boucher said by phone from Quebec earlier this week. “I think when you’re in junior sometimes you think that’s going to take care of your offense, and I think as you get older, the more sound defensively you get, the more opportunity you get offensively.”

“I was very disappointed after the cut with Team Canada,” Gauthier-Leduc said. “I wanted to make that team. It was one of my dreams when I was young. I was … (ticked).”

Gauthier-Leduc signed his three-year, entry-level contract with the Sabres shortly after the snub, and then endured rumors Rimouski would trade him.

Ultimately, keeping Gauthier-Leduc paid off. Rimouski enjoyed a wild run all the way to the QMJHL final.

“I think he handled it pretty good,” Boucher said. “He had ups and downs. But mainly he’s just a fun-loving kid that just loves to be at the rink, loves to be around his teammates and likes the game.”

Now, Gauthier-Leduc is embarking on a career path similar to Boucher’s.

Twenty years ago, Boucher, selected 13th overall in 1991, thought he’d be spending his rookie pro season in Rochester. Instead, he played the first 18 of his 748 NHL games.

“I stayed in Buffalo when I was 19, so that was a little bit of surprise for me,” said Boucher, who was traded to Los Angeles in 1995. “Everything happened so fast. I think it’s a little bit like that for him.”

Gauthier-Leduc might have to wait longer to crack the big leagues, however. The Sabres have about nine NHL defensemen, and 2010 first-round pick Mark Pysyk is also turning pro.

“I have to prove something,” Gauthier-Leduc said, “and … I’m sure I’m going to play a couple years in the (AHL).”