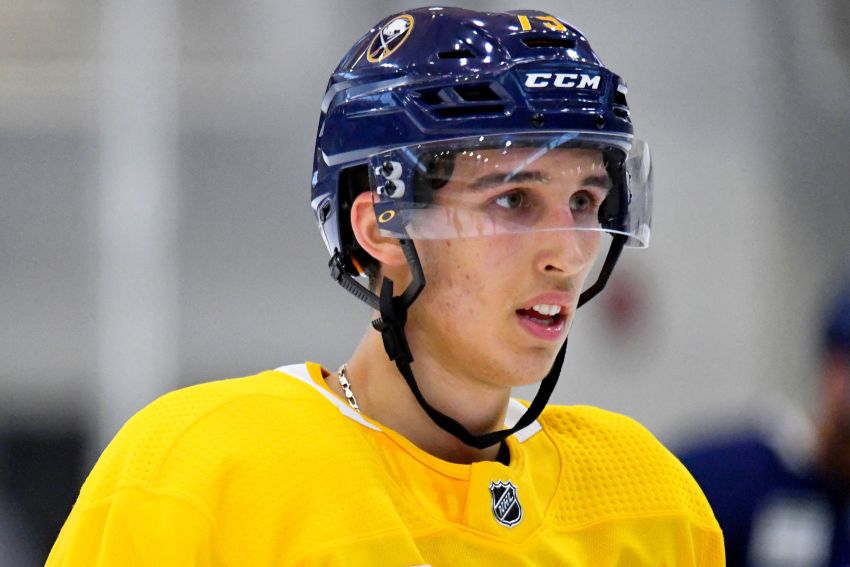 “He was trying to be a different-maker every time on the ice,” Krueger said after the Sabres prepared for the Pittsburgh Penguins.

The seventh overall pick knows he must calm down a little.

“I can’t be out there trying to dangle everyone and turning pucks over,” Cozens said. “I got to simplify it, especially at the this level at the start of the season.”

Cozens is one of several big names playing in tonight’s contest at Pegula Ice Arena on the campus of Penn State.

Cozens, 18, should receive some notable ice time. In addition to having him pivot Remi Elie and Tage Thompson, Krueger plans to utilize Cozens on the power play.

“We’ll give him an opportunity just to play his game and show his tools,” Krueger said. “We’re looking for simplicity.”

General manager Jason Botterill recently said he doesn’t expect Cozens to make the Sabres this year. In a week or two, he will likely be returned to the Lethbridge Hurricanes, his junior Western Hockey League club.

“My goal is to stick here as long as I can,” Cozens said. “But if not, I’m going to be happy to go back to Lethbridge and have another year of development. But, yeah, my goal is to make an impression and make a hard decision for them to make.”

Through three days of camp, the size and speed of the NHL has wowed the 6-foot-3, 180-pound Cozens.

“I know that I need to get stronger and just faster and quicker in everything that I do,” Cozens said. “Just watching these guys and how much they take care of their bodies is something I’ve learned a lot and I’m going to take with me for the rest of my life.”

Krueger said goalie Carter Hutton will start and could be relieved by Jonas Johansson.