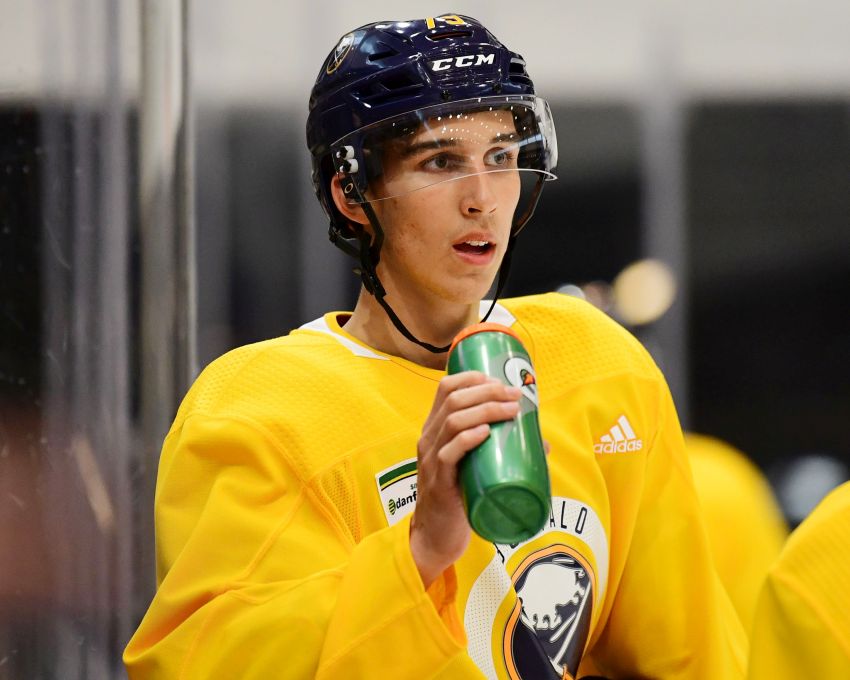 Cozens, who underwent surgery on his left thumb in early July, ditched the non-contact threads and sported a yellow jersey, meaning the seventh overall pick could do everything on the ice.

“I think it’s feeling normal right now, just being with the guys again, going out, practicing, being treated like another normal player,” Cozens said inside Harborcenter. “Not wearing a red jersey, I think that’s big. I’m feeling good right now.”

But is Cozens, who hurt his thumb during a development camp scrimmage June 29, ready to play in Friday’s Prospects Challenge opener against the New Jersey Devils?

“You want to play,” the center said. “But still, we’re going to have a conversation tomorrow and we’re going to decide whether I play or not. We’ll see. Either way, it’s fine. It’s not a huge deal. The focus is main camp.”

Update: The Sabres have cleared Cozens to play. He will dress against New Jersey.

The Yukon native said his biggest focus rehabbing his thumb has been “re-strengthening it and being able to do normal day things again.”

Cozens said sitting at home wearing a cast, unable to do anything made him “anxious.”

“You don’t want to wish summer away, you know?” Cozens said. “But you’re always excited to get back to the hockey season.”