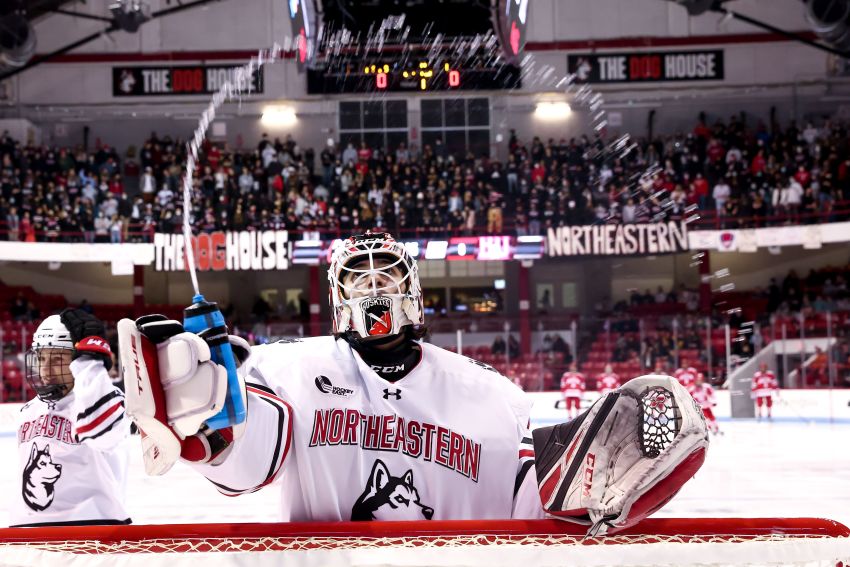 BUFFALO – When goalie Devon Levi told Sabres general manager Kevyn Adams he would be returning to Northeastern, the prospect explained how another season in college could offer him what he craves.

“He’s such a mature kid the way he looks at it,” Adams said this morning inside KeyBank Center. “And one of the things he said that I found interesting is that, ‘I wanted to feel that pressure every day of people looking at me like I’m a top guy,’ which is a pretty interesting way to look at it.”

Levi, 20, just enjoyed a dynamic season, compiling a 20-10-1 record with a 1.54 goals-against average, a .952 save percentage and 10 shutouts in 32 games. He is a finalist for the Mike Richter Award, given annually to the NCAA’s top goalie.

In his first season – he had sophomore playing status but did not play as a freshman – Levi quickly developed into one of the college hockey elite netminders.

Clearly, the 6-foot, 190-pound Levi could make the jump the pro hockey. And if he felt ready, Adams said the Sabres would’ve welcomed him.

But Adams said the Sabres “were totally on board with it” with Levi going back to Northeastern.

“We think it’s good for him,” he said. “If he came and he was ready mentally and what he thought was right for him, that would’ve been great, too.”

The Sabres acquired the rights to Levi, a seventh-round pick in 2020, 212th overall, last year in the Sam Reinhart trade with the Florida Panthers.

A rib injury prevented Levi from playing as a freshman. He did, however, star for Team Canada at the 2021 World Junior Championship. Earlier this year, he earned a roster spot on Canada’s Olympic entry but did not play at the Beijing Games.

Meanwhile, Adams said he plans to talk to two of the team’s other college prospects – Michigan goalie Erik Portillo and Minnesota defenseman Ryan Johnson – this weekend at the Frozen Four in Boston.

Adams said the Sabres are fine with the youngsters – Portillo is a sophomore and Johnson and is a junior – turning pro or returning to school.

“There’s no downside if they stay, in my opinion,” he said.

Adams said the Sabres would’ve been OK with Levi and Portillo both turning pro.

Granato will make one lineup change, inserting defenseman Will Butcher for Mark Pysyk. Butcher has sat out the last two games.

“Will has a lot of hockey sense, so he makes a lot of nice, little, subtle plays,” Granato said. “… He’s extremely talented and offensively gifted as far as how he sees the game and ice and offensive opportunities, even transition opportunities. So, yeah, he’s been effective within his skill set very much when we’ve had him in there.”

Adams said Miller had symptoms and will take longer to return than some other players who had COVID.