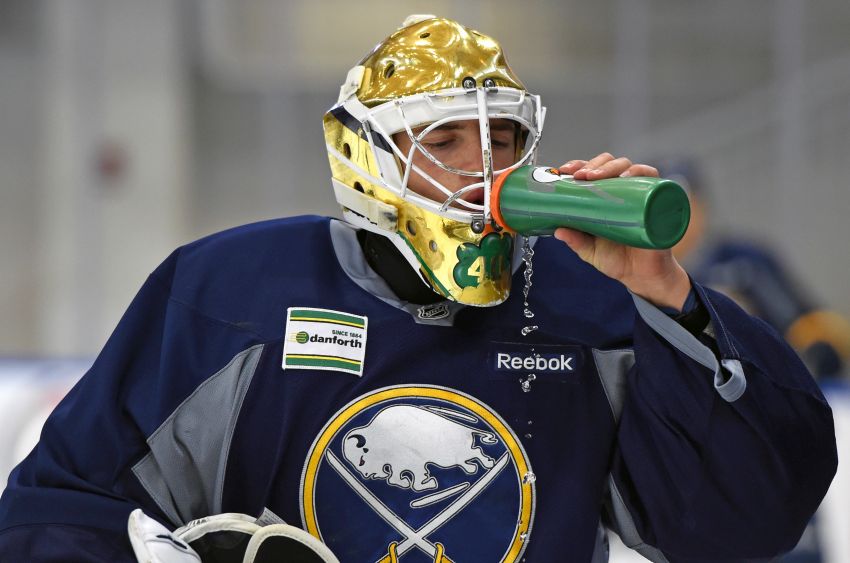 The Sabres have 30 days to sign Petersen, one of the NCAA’s best goalies and the Fighting Irish’s captain, or they lose his rights. A press release from Notre Dame stated Petersen “could sign with the Sabres or become a free agent later this summer.”

While Petersen could be coming to Buffalo, the Sabres could pass on signing center prospect Giorgio Estephan.

NHL teams have until 5 p.m. today to ink their 2015 non-collegiate draft picks to entry-level contracts.

Letting go Estephan, 20, would be a bit curious. He just enjoyed a big season with the Lethbridge Hurricanes, scoring 35 goals and 89 points in 68 games. He added 11 goals and 24 points in 18 playoff contests.

The Sabres selected Estephan in the sixth round, 152nd overall, two years ago. Of course, he was drafted by Murray. Jason Botterill is now GM.

The Sabres could also pass on signing forward Gustav Possler, a fifth-round pick, 130th overall, in 2013. Possler 22, had two goals and four points in 21 games with Djurgardens IF, a Swedish Elite League team, in 2016-17.

The Sabres made one addition Wednesday, signing goalie prospect Jonas Johansson to a three-year, entry-level contract.

The 6-foot-4, 204-pound Johansson mostly spent the last three seasons developing with Almtuna IS, a second-tier team in his native Sweden. The 2014 third-round pick, 61st overall, has also occasionally earned recalls to the SHL, the country’s highest league.