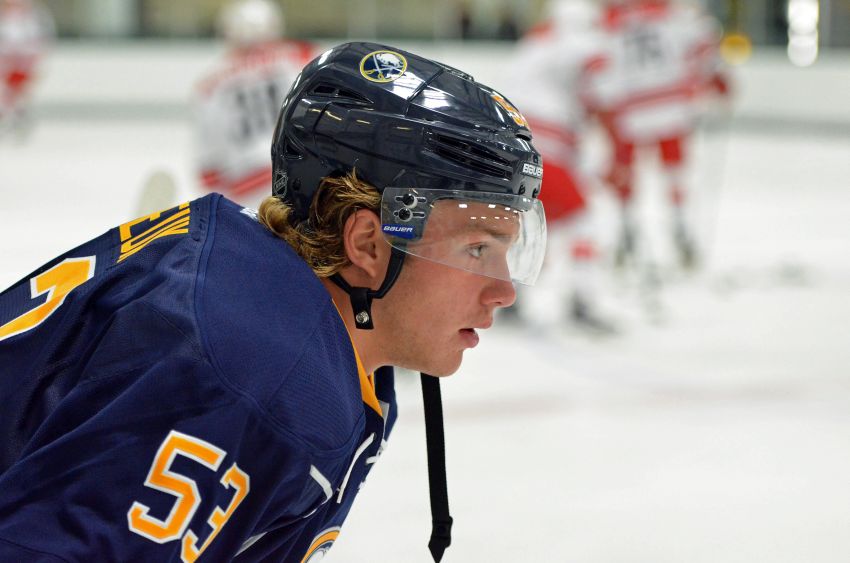 BUFFALO – Rookie Brendan Lemieux figures he has a chance. Sure, the Sabres have more experienced players fighting for the two or three open wing spots this training camp. But the 18-year-old believes a place in tonight’s preseason lineup means they want to evaluate him.

“I wouldn’t be here if I didn’t have a chance,” Lemieux, the 31st pick in June, said this morning inside the First Niagara Center. “I don’t think they would’ve kept me around if they didn’t think they were looking for response. …

“My goal’s definitely to make the team. I think I have a chance. I’m going to keep working until I can.”

Lemieux skated on the left wing beside Mikhail Grigorenko and Patrick Kaleta, who’s playing his first game since tearing his ACL on Nov. 29, this morning.

Tonight’s lineup will be much stronger than the one coach Ted Nolan dressed Sunday.

Tonight could be it for Lemieux, a slick agitator many projected to be a first-rounder. The Sabres will likely assign him to the Ontario Hockey League’s Barrie Colts soon.

“He’s a very personable young man,” Nolan said. “He wants feedback. He’s one of the younger players that actually come to you and ask how I did, how I looked, and it’s not in a suck-up mode. He really wants to learn, wanted to get here, and I think he comes from good stock. His father knows about the game.”

Lemieux called his preseason debut “a dream since I’ve been a kid.”

“It’s just one more step in the right direction,” he said.

Kaleta, meanwhile, acknowledged he has some nerves.

“It’s exciting,” he said. “To be honest, I’m pretty nervous, too. It’s been a while since I played a game. I think the excitement part is starting to take over.”

In other news, Nolan said the Sabres will name a new captain when camp breaks. Gionta, Gorges and Moulson will be the alternates tonight.