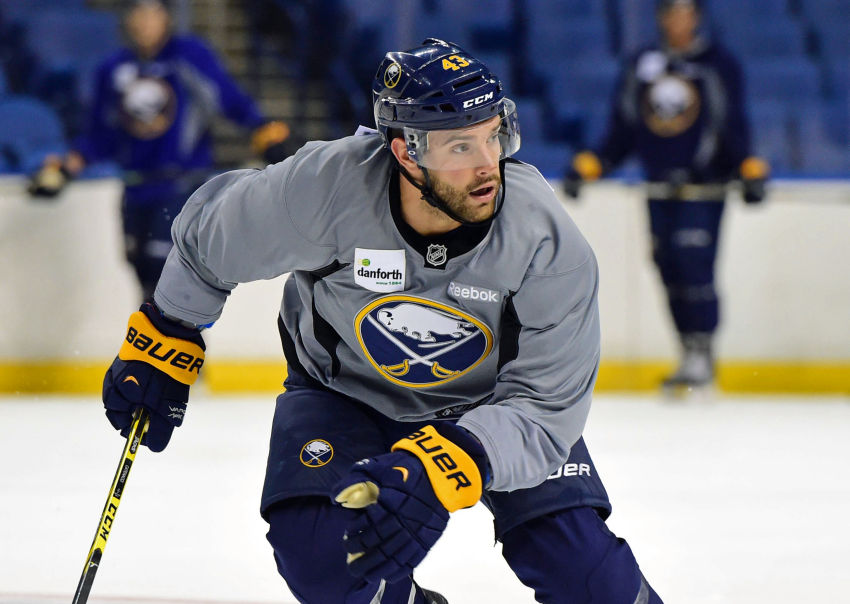 TORONTO – Instead of being in Canada’s largest city for an NHL exhibition game tonight, Buffalo Sabres prospect Brendan Guhle figured he’d likely be playing his first junior game this season about 3,000 kilometers away – hey, check the dateline – in Saskatchewan for the Prince Albert Raiders.

But the defenseman, the 51st pick in June, will play his third straight preseason game tonight against the Maple Leafs inside the Air Canada Centre.

“Good luck to the Raiders,” said Guhle, the only Sabre to play in every preseason contest.

So far, a week into training camp, Guhle, 18, is Buffalo’s biggest surprise. His strong skating and poise have helped the youngster receive a long look.

“The Buffalo Sabres aren’t the only people saying right now it’s a late second-round pick and being surprised about it,” Sabres coach Dan Bylsma said. “His skating and his ability has shown pretty well against NHL players.”

Guhle was given his first game and earned two more. Bylsma liked the way he handled some adversity in Wednesday’s 5-2 loss to Ottawa. He said earlier this week Guhle likely won’t make the Sabres, however.

In other lineup news, goalie Robin Lehner will start tonight and play two periods before Nathan Lieuwen relieves him.

Winger Dan Catenacci will play his first NHL exhibition game not far from Newmarket, Ont., his hometown. Catenacci was supposed to play earlier this week but Bylsma wanted him to skate in Toronto.

The rest of the lineup is below. Bylsma said Sam Reinhart playing wing tonight was planned before camp.

Update: Sabres winger Jason Akeson won’t be disciplined for his high hit on Ottawa’s Colin Greening on Wednesday, the NHL Department of Player Safety tweeted this afternoon. The hit was ruled unavoidable after a hearing.