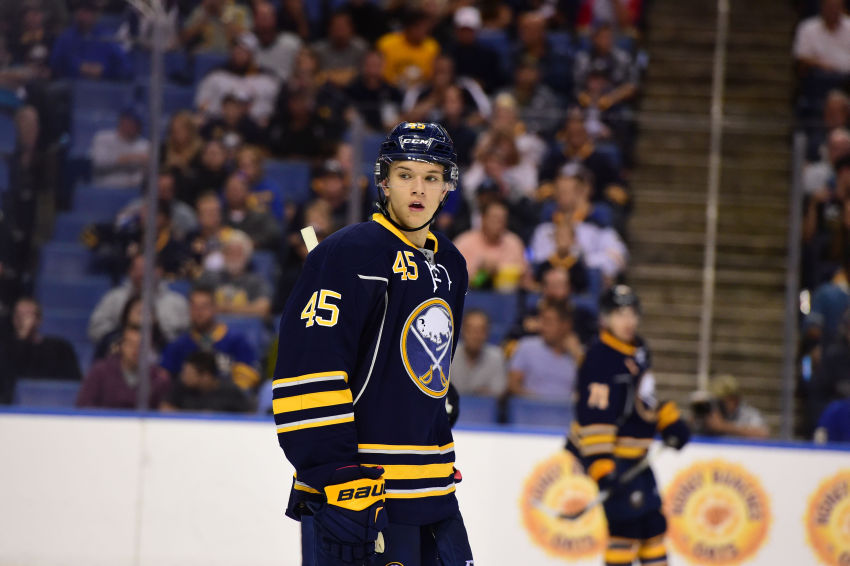 BUFFALO – Sabres defenseman Brendan Guhle was warming up with his junior Prince George Cougars teammates Friday when his coach gave him some unexpected news.

“Told me I was traded to the Sabres,” a smiling Guhle, who was summoned to help the Sabres’ beleaguered blue line, said this morning prior to his NHL debut.

Actually, the Sabres recalled Guhle, their top defense prospect, on an emergency basis for this afternoon’s tilt against the Boston Bruins inside KeyBank Center because Josh Gorges blocked a shot Thursday.

Gorges’ injury means three regular defensemen – Zach Bogosian (knee) and Dmitry Kulikov (back) – are sidelined. Sabres coach Dan Bylsma will have an update on Gorges after the game.

“I wasn’t even sure that was really allowed,” Guhle said of getting recalled midseason.

Guhle, a 2015 second-round pick, has impressed the from the get-go. He earned a contract weeks after the NHL Draft and has turned heads in the last two training camps.

Bylsma said the Sabres considered keeping Guhle out of camp this year with the team going to Alberta early.

Guhle said he arrived in Buffalo about 1:30 this morning.

In injury news, Bylsma said Kulikov has skated for the last seven days, the last two with physicality. The Russian could practice next week. Meanwhile, Bogosian is 10 days to two weeks away.

What about the injuries in Rochester?