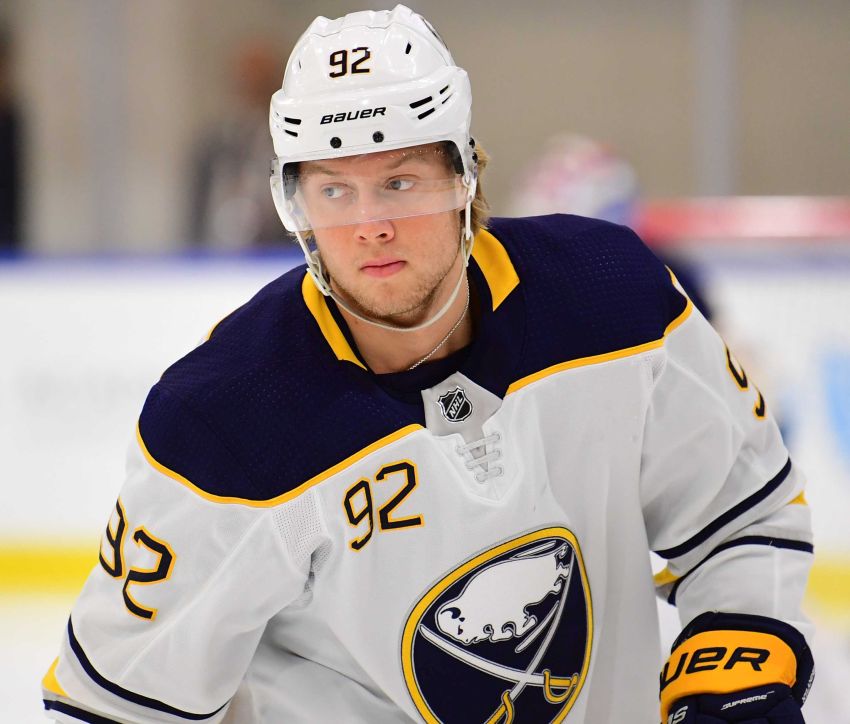 BUFFALO – On Feb. 27, Sabres prospect Alexander Nylander played his 13th straight game without scoring a goal. At that point, nearly five months into his third AHL campaign, the chances of the slick winger earning a recall looked slim.

Nylander, 21, enjoyed a strong training camp this season, nearly forcing the Sabres to keep him. The Swede parlayed that into a terrific start with the Rochester Americans, scoring six goals and 17 points in his first 19 games.

But Nylander, the eighth overall pick in 2016, started slumping around December. Over a 26-game stretch, he mustered only two goals and eight points.

Then on March 2, Nylander finally ended his marathon drought, scoring his first goal since Jan. 4. He scored again in his next outing and again and again.

On Sunday, a day after he scored in his fourth straight game, the Sabres recalled Nylander for the first time since late last season.

“I’m getting more into scoring areas, shooting more pucks,” Nylander said of what has changed for him. “I know I have a good shot so I’ve just got to keep shooting, making plays out there.”

Did someone suggest Nylander start utilizing his shot more often? He pumped 12 shots on goal during his torrid four-game run. In the previous 13 contests, he registered one shot or zero six times.

No, Nylander said, he simply decided he needed to do it.

It certainly paid off. Nylander will play tonight against the Dallas Stars, his first NHL appearance since April 7, last season’s finale.

With captain and leading scorer Jack Eichel suspended two games for an illegal check to the head, the reeling Sabres, who have lost four straight games, need more offensive punch. Perhaps Nylander can provide some.

Nylander skated at right wing Monday beside center Evan Rodrigues and Conor Sheary. He also had a spot on the power play.

“I’d like to see the exact same things that got him an opportunity to come up and play for us,” Sabres coach Phil Housley said. “Just talking to (general manager Jason Botterill) and (Amerks coach) Chris Taylor, he’s playing very well right now. He’s scoring, he’s shooting the puck a lot more and we want him to attack the game with that same focus that he’s had when he’s been in Rochester.”

Nylander could be running out of opportunities with the Sabres. The team’s old regime drafted him. Botterill has been putting his stamp on the organization, dealing many of ex-GM Tim Murray’s acquisitions.

Most recently, Botterill traded defenseman Brendan Guhle, one of the Sabres’ prized prospects not long ago, on Feb. 24.

Nylander’s skill is undeniable. Some scouts pegged him as perhaps the most talented player in his draft class.

Still, he has often struggled as a pro, failing to showcase the tenacity to match his skill.

The Sabres assigned him to the Amerks two years ago, making him the AHL’s youngest player at just 18. As a rookie, he compiled 10 goals, 28 points and a team-worst minus-24 rating in 65 games.

Last season, he hurt his groin, missed all of training camp and didn’t play make his season debut with the Amerks until November.

Many of Nylander’s improvements can be traced to last offseason, when the Sabres challenged him. Amerks GM Randy Sexton called his summer “critical.”

Nylander arrived back in Buffalo a different, more mature player.

“Early, before camp, skating with him, it just seemed like he was a lot more confident in his skin,” Sabres winger Kyle Okposo said. “He seemed to just have a better head about him.”

After getting sent down – he was among the final players sent to Rochester – Nylander tried to seize his chance with the Amerks.

“I wanted to be here (in the NHL), but I just tried to take it and learn as much as I could down there, being more experienced – it’s my third year – to be as ready as possible when I get called back up,” said Nylander, who has scored one goal and two points in seven career NHL games.