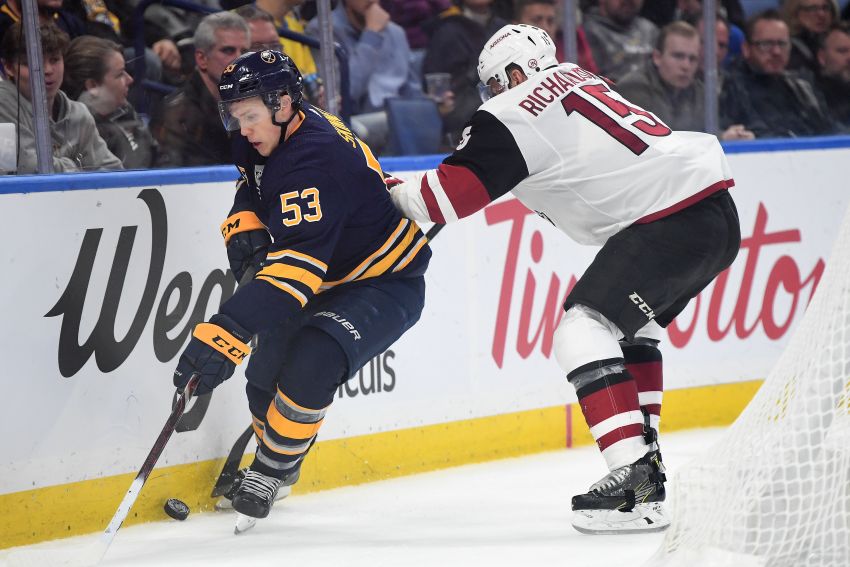 BUFFALO – Less than a minute into Thursday’s 3-1 win over the Arizona Coyotes, Sabres winger Conor Sheary intercepted an ill-advised pass defenseman Alex Goligoski telegraphed up the middle of the ice.

A few seconds later, center Casey Mittelstadt scored from the slot, putting the Sabres up at the 48-second mark. Barely six minutes after the rookie registered his first goal in nine games, winger Jeff Skinner easily converted captain Jack Eichel’s pass on a two-on-one for his team-leading 22nd goal.

Early Thursday, it looked the like the Sabres would rout the Coyotes, who arrived in town beat up – six regulars are injured – and losers of three straight contests.

But the Coyotes settled down. Winger Christian Fischer scored 25 seconds after Skinner. Then things got a little boring before winger Evan Rodrigues’ third-period goal sealed it, igniting the crowd of 16,872.

“That probably wasn’t the prettiest game but (we found) a way to win and that’s what’s important,” Eichel said following the Sabres’ 11th home win, which, incredibly, equals their total from all of last season.

Still, with 44 seconds left, Carter Hutton, one of the NHL’s top puck-handling goalies, generated some excitement.

With the Sabres enjoying a two-goal lead and goalie Darcy Kuemper on the bench, the Coyotes rimmed the puck around the boards. Hutton grabbed it and decided it would be a perfect time to try for his first NHL goal.

But the puck never got close to the empty net, as he shot it right into Coyotes defenseman Oliver Ekman-Larsson. Officially, Hutton was credited with a giveaway.

Hutton said he had tried “a few times” to score earlier in his career.

“I’ve had a couple icings, but that’s the best I’ve ever done,” said Hutton, who made 25 saves in his first start since Dec. 3. “I had a good line, I think Ekman-Larsson’s got to let that one go for everyone’s sake. No, he made a good play up there in the air.

“We got a two-goal lead, I had a good chance at the rim, I kind of had it in my mind to take a chance at it. I think I forced it a little bit.”

Eichel said he knew Hutton would try to score.

“He plays the puck so well and he’s always messing around,” Eichel said. “I had a feeling if they rimmed one in he would do it. I would’ve loved to see him get one. He’s been so good for us this year.”

The entire team has been pretty good this year. The Sabres, who have already earned 42 points, now joke about goalies trying to score goals. On this date a year ago, they had eight wins. Right now, they have 19.

Their improved play at home has helped transform the Sabres into one of the NHL’s best teams.

The Sabres beat the Coyotes because they pounded out a tight game. While most of their recent wins have been close, most of them have been comebacks they secure in overtime or a shootout.

On Thursday, they never relinquished the lead.

“It was a tight game, you never know which way the direction of the game’s going to go, but I thought our guys took the onus and the responsibility of just managing the game the right way,” Housley said. “As a result, we were able to lock a 2-1 lead after two periods. It’s a credit to them.”

Like in Tuesday’s 4-3 overtime win against the Los Angeles Kings, secondary scoring boosted the Sabres. Mittelstadt’s goal, his fifth, was his first since Nov. 23. Rodrigues, meanwhile, scored just his second goal and for the first time in 10 games.

“When we a little depth element, it’s definitely huge for us,” Mittelstadt said. “It takes a little pressure off them and we get to go make plays. It helps us. I think it helps the whole team’s confidence.”