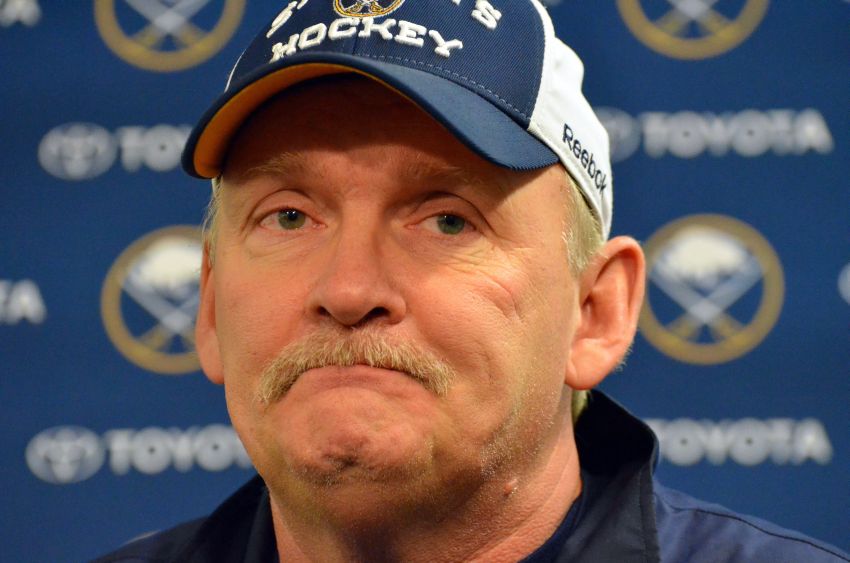 BUFFALO – On the surface, it sounds like a dynamic early-season combination. Goalie Ryan Miller locked in, on top of his game. Twenty-two goals and 49 points from the Sabres’ top line, highlighted by 11 scores and 23 points from superstar Thomas Vanek.

Well, it’s added up to a 5-7-1 record, 11 points and a last-place Northeast Division standing entering tonight’s tilt in Ottawa against the Senators.

The defense, the Sabres’ supposed strength, is terrible. Only three or four players are scoring regularly. They’ve lost a league-worst 56.3 percent of their faceoffs, forcing them to defend constantly.

Thirteen contests into the 48-game season, the Sabres, who had Monday off, are one of the NHL’s biggest dregs.

What’s happened? For starters, it appears they’ve significantly overvalued their own talent. Like much of last season, players are underperforming across the board.

–Alleged franchise defenseman Tyler Myers, who’s earning $12 million this season, has one point, a wretched minus-9 rating and was a healthy scratch the past two games. Adam Pardy has equaled Myers’ point output in one game.

–Winger Drew Stafford, in the second season of a four-year, $16 million deal, hasn’t scored this season.

–Rookie Mikhail Grigorenko, while talented, isn’t trusted enough to play regularly and has one goal. Sabres coach Lindy Ruff scratched him for Sunday’s 3-1 loss to Boston.

–Winger Nathan Gerbe, who scored 15 goals over a 38-game stretch two years ago, has nine in his other 117 NHL games, including none this season.

Enroth can’t provide much relief to Miller, who’s seen an NHL-high 368 shots through 11 starts, 33 a game. Miller’s never averaged more than 30 shots a game in a full season. He faced 81 during two weekend tilts, including 43 on Saturday.

The Sabres have scored 38 goals, 2.92 a game, sixth in the league. That should translate into wins. But they’ve allowed a league-worst 46, 3.54 a contest.

But where would the Sabres be if Miller hadn’t been playing well? He single-handedly stole Saturday’s 3-2 win over the Islanders in New York.

“I let in four goals and we won a few games,” Miller said Sunday when asked if he felt he had to perform flawlessly to win.

The Sabres’ reliance on Vanek, Cody Hodgson and Jason Pominville and second-line center Tyler Ennis for offense is alarming. The four have combined for 27 goals, a stunning 71 percent of the offense.

The secondary scoring is about as reliable as the No. 2 netminder.

Following Enroth’s 13th consecutive loss last Tuesday, Ruff told the struggling youngster he has to work out of his 15-month slump.

“What that means is extra work whenever he can get it,” Ruff said last week. “There’s not a lot of quality practice time, but the extra work time is going to have to get in. We’ll have to deal with that.”

Enroth was once unbeatable, winning nine straight decisions from late 2010-11 into early last season. He even stole a start from Miller in November 2011, igniting a goaltending controversy.

But the Swede suddenly began playing poorly, finishing 0-8-3 with a 3.19 goals-against average and .908 save percentage following his last win.

Enroth performed well in a low-level Swedish league during the NHL lockout before enjoying a strong NHL training camp last month. That hasn’t helped him, though.

He’s sporting a 4.73 goals-against average and .847 save percentage in three appearances (two starts).

What’s happened to Enroth? Has he lost his confidence?

“I don’t know,” Ruff acknowledged. “I felt good about how he played overseas. (He) came into camp, looked really good the whole camp and then had a tough start in Carolina (on Jan. 24), although I didn’t like what we did around him. I thought what we did around him in Ottawa (last Tuesday) was a lot better. …

With the schedule so compressed, Miller will need to rest occasionally. Ruff has said Enroth would get about 10 or 12 starts. But can he really keep running the 24-year-old out there?

That’s just one of Ruff’s many problems.

One thought on “Sabres possess slew of underachievers in disappointing season”