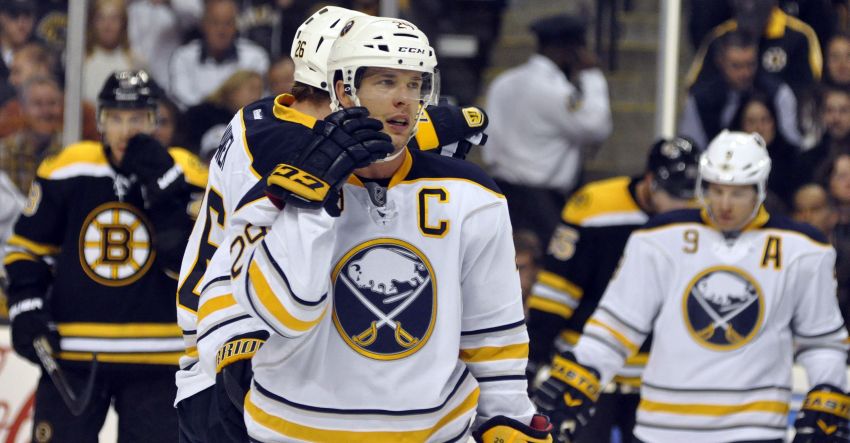 Why not get a third party involved?

That finally happened Wednesday at an undisclosed location, as the Federal Mediation and Conciliation Service began overseeing negotiations between the league and the NHLPA.

“Hopefully, he can (lend) his opinion and bring some new ideas and make both sides understand you got to give and you got to take, and it’s not only take, take, take,” Buffalo Sabres captain Jason Pominville said about mediation Wednesday after skating inside the Northown Center. “And maybe make the NHL understand our point of view is pretty good and pretty fair.”

He added: “If he’s a skillful mediator, we might come out with something pretty good.”

The chances of that happening could be slim, however. Mediators hold no power. They also worked with the sides during the 2004-05 lockout before the season was canceled.

Still, their presence creates a different dynamic. Little or no traction has been gained during recent bargaining sessions, including last Wednesday, when the NHL rejected an offer in which the union said it would take a fixed percentage of hockey-related revenue, not a guaranteed amount.

Defenseman Jordan Leopold, the Sabres’ union representative, said he’s “cautiously optimistic as always” with mediators joining the fray, something he said the NHLPA has wanted all along.

“Hopefully, we get some kind of jumpstart for some negotiations,” Leopold said. “But as history as proven, we’re negotiating against someone that doesn’t want to negotiate with us. We’ll see.”

If mediation doesn’t work, decertification, a drastic move that would dissolve the union and create a possible court fight, could be next. Sabres goalie Ryan Miller told the Globe and Mail last week he supports decertifying, something the NBA and NFL both pursued during lockouts last year.

“It’s worked for the other sports,” Pominville said. “At the same time, it’s a pretty scary subject when you have to do that. It’s pretty complicated. … It might force them and put pressure on them to act a little quicker than they are right now. I think it can go both ways.

“We’re in a position where a mediator is involved,” he said. “We have to take that step. One step at a time.”

Pominville’s next step could be finding work in Europe. The winger expressed an interest in going overseas a couple months ago. He’s mostly stayed put in Buffalo to be with his family, though, only leaving to play in a Quebec charity series.

Now, with the stoppage dragging on, he’s started exploring his options more seriously in the past few weeks.

“We’re looking at opportunities in places that I would be interested in going,” Pominville said. “I don’t know if I’d go anywhere.”

Pittsburgh Penguins superstar Sidney Crosby said earlier this week he and his agent are looking into European opportunities.

If the game’s biggest name bolts, it could send a message.

“It says something maybe to the owners that he’s willing to go somewhere and take the chance to maybe go there and get hurt,” Pominville said. “Who knows what will happen after that? But he wants to play just like everyone else, and it shows everyone that guys are in it to play and they want to keep themselves prepared. …

“I’m thinking you might see more and more guys head that way.”

The Rochester Americans’ Dec. 28 home game against the Lake Erie Monsters has been moved from the Blue Cross War Memorial to the First Niagara Center.

The Amerks had already switched one home game to Buffalo, an Oct. 23 tilt that drew 10,936 fans. If the lockout continues, more could be moved.

In other Amerks news, the team has already recalled defensemen Matt MacKenzie and Drew Schiestel from the ECHL after less than a week. Schiestel, a former second-round pick, was an AHL All-Star two years ago.

According to Forbes.com, the Sabres are worth $175 million, 22nd among NHL franchises. By comparison, the league’s most valuable team, the Toronto Maple Leafs, are worth $1 billion. The New York Rangers are second at $750 million. The St. Louis Blues rank 30th, worth only $130 million, just $4 million more than the Phoenix Coyotes.