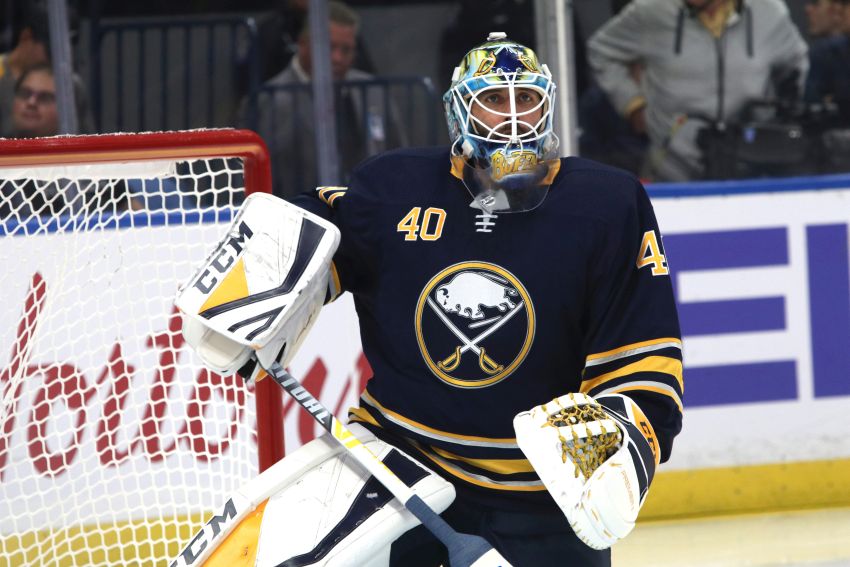 The Sabres don’t respect the defensive side of the game.

In their sixth loss in eight games, the Sabres, like so many other recent outings, played a one-dimensional contest, simply focusing on their offense. The Blackhawks, meanwhile, exploited seemingly every miscue, scoring five goals off turnovers.

The ugly, disjointed effort left Housley seething as the Sabres kicked off a seven-game home stand.

“We’re too busy trying to score goals, and then when the puck gets turned over or there’s a possession in question, that switch isn’t going off, we’re waiting for somebody else to come back,” the coach said. “(It’s) the lack of respect of our own net.”

Sabres winger Jason Pominville echoed Housley, saying, “We want to score and we have no respect for our end right now.”

“It’s been a trend for a little while,” said Pominville, the Sabres’ oldest player at 36. “It’s definitely an area we’ve got to clean up. We made those guys look really good because we had no respect for our end. Everything they got, we gave them.

The Sabres have been brutal defensively, giving up for four or more goals in six of the last eight games. They’ve let in seven goals in twice in six contests.

Why isn’t the message sinking in?

“We’ve relayed it,” Pominville said. “The coaches have talked about it, we’ve talked about it. I think the best way is just going out there and doing it. Whether it’s me or anyone else, it starts with your end. You have to defend.

“Yeah, we’ve got to score and we have to find ways to get on the board offensively. The biggest thing is defending this time of year. You’re not going to win if you don’t.”

Still, the Sabres generated plenty of opportunities, especially early, outshooting the Blackhawks 14-7. Of course, they gave up a slew of prime opportunities looking for the pretty play.

So much for that shot mentality Housley always stresses.

“In this league, if you don’t want to get there, you’re not going to score.”

He added: “Our first period we dominated.”

The Sabres ended the first period down 1-0 after Drake Caggiula scored at 18:38, capitalizing on Sam Reinhart’s turnover.

“You look at the five goals out of the seven, the puck’s on our stick, we’re trying to make plays through people against a team that’s very effective off the rush, not that we didn’t talk about that,” Housley said.

The Sabres imploded at the start of the second period. Superstar Patrick Kane scored a breakaway goal at the 50-second mark, his 900th career point and 30th goal this season. The South Buffalo native later added an empty-net goal and two assists.

After Duncan Keith scored at 5:06, following his own rebound to the net, the Sabres looked finished.

While Sabres goalie Carter Hutton likely wants Keith’s goal back, his teammates continually hung him out to dry.

“I just have to worry about myself,” Hutton said.

Housley said: “My level of concern is the odd-man rushes coming at him.”

The Sabres, who pumped 43 shots on goalie Cam Ward, made a couple pushes later on. But following captain Jack Eichel’s second-period goal, Brendan Saad scored on a two-on-one the Sabres left for winger Evan Rodrigues to defend.

At the end of the second period, many in the crowd of 18,205 inside KeyBank Center booed the Sabres off the ice.

Housley replaced Hutton with Linus Ullmark to start the third period. Goals from Pominville and winger Kyle Okposo (power play) got the Sabres to within 4-3. At one point, they had an 11-0 shot advantage.

Then they fell apart again.

For good measure, Saad scored his second of the night and the Blackhawks’ final goal after defenseman Marco Scandella whiffed on a pass inside his blue line.