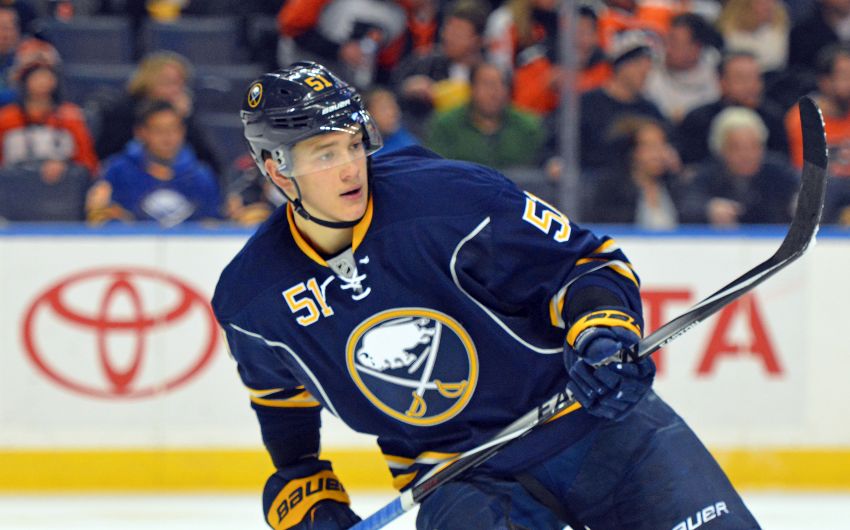 Sure, Zadorov, the 16th pick in 2013, is an elite prospect. At just 19 years old, he’s already a big contributor to the Sabres. Zadorov recently compiled seven points in seven games. The Sabres scored only 16 times in that stretch. He could be a franchise cornerstone very soon.

But Murray’s patience might be wearing thin after Zadorov was benched for missing a team meeting after oversleeping Sunday morning. On a team-produced radio program on WGR, Murray said Monday, “The issue is he’s not always punctual.”

Maturity has been an issue throughout Zadorov’s rookie season.

“It doesn’t matter if I was drafted by other guy,” Zadorov said Monday inside the First Niagara Center. “I’m on his team. It’s his team right now. Yeah, I’m worried because I didn’t do the right things.”

After skating in the Sabres’ optional practice, Zadorov, who likely won’t play tonight in Columbus, owned up for a mistake he refused to attribute to his age.

Zadorov stood up before his teammates and apologized for the second time in less than a month.

“I just feel sorry this happened. … I couldn’t do that,” Zadorov said. “It was my mistake, 100 percent, no excuses, couldn’t do that. I spoke with the team, I said, ‘I’m sorry, boys. I don’t want to lose your trust.’ It’s all about the team. I just want to get back as soon as I can and help the team.”

Murray was clearly upset with Zadorov. Their chat Monday morning was “ten minutes of me talking, and not very politely,” Murray said.

“He’s a good prospect, but he’s not getting the keys to the kingdom here,” he said. “He’s just one player, and he has to be a better teammate.”

Murray recently said the Sabres have no untouchables but named Zadorov as a player he plans to keep.

What did Murray tell Zadorov on Monday?

“He said … ‘You can’t do that, you’re a young guy, you got to be careful. You got to have a plan B or something like that every time,’” Zadorov said. “Same thing with the flight. I will work on that. It’s my fault.”

“I’m quite sure a lot of young 19-year-olds in university probably slept in and missed an exam once in a while,” he said.

“He’s a great kid,” Nolan said. “It’s just sometimes it takes a little bit of time. We still got to take into account his age and where he came from and different country, different environment – everything’s different.”

With Zadorov and Tyson Strachan (infection) out Sunday, the Sabres recalled defense prospects Jake McCabe and Mark Pysyk. Both will likely play again tonight against the Blue Jackets.

“The defense last game, I thought they all played pretty well,” Nolan said. “To make a change just to make a change, I don’t think we’ll do that.”

In just his fifth NHL game this season, Pysyk played impressively throughout Sunday’s 2-1 shootout loss to the Nashville Predators.

Pysyk looked ready for regular duty when the Sabres sent him to Rochester to perfect his game halfway through last season. The 23-year-old’s absence this year has raised some eyebrows, especially with veteran defensemen Andre Benoit and Andrej Meszaros struggling.

“Last time he was up he was ready for primetime,” Nolan said about Pysyk. “I thought he played a real strong, solid game (Sunday). McCabe’s coming, too. As far as who’s ahead of who, Pysyk right now seems like he’s really ready.”

Nolan clearly wanted Pysyk to stay when the Sabres recalled him in December, although he stopped short of saying so.

“Personally, I like Mark, and I think he’s ready,” he said. “As a coach, you just got to make sure you’re as patient as the players are.”

Nolan said about the youngsters: “We’ll wait. I think the waiting here is going to be very worthwhile.”

The additional time in the AHL allowed Pysyk to play in every situation and briefly serve as the Americans’ captain.

Forget about former Sabres goalie Ryan Miller enjoying a special homecoming to Buffalo with the Vancouver Canucks on Thursday.

Miller injured his right knee Sunday when teammate Jannik Hansen crashed into him in Vancouver’s 4-0 win against the New York Islanders. The former Vezina Trophy winner will miss four to six weeks, according to Sportsnet.

“It’s too bad,” Nolan said. “I’m quite sure he was really looking forward to coming back here and playing. But good for us maybe.”

Backup Eddie Lack will sub for Miller, who likely won’t be in Buffalo.

The Sabres are in a stretch of eight games in 14 days, so Nolan made Monday’s practice optional.

“Resting and recovering is very important, as much as practice is sometimes,” Nolan said.