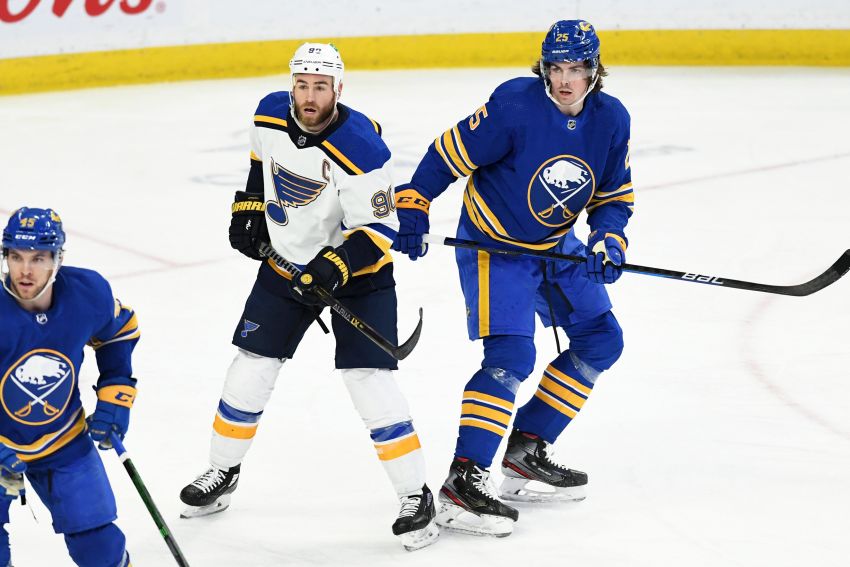 BUFFALO – The Sabres drew about 3,000 extra fans Thursday, and you can bet they all came to see ultra-talented defenseman Owen Power play his first home game.

The crowd of 11,565 spectators and Power’s teammates watched him closely all night, sensing something exciting could transpire every time the rookie stepped on the ice.

“Every time he was out there it put a smile on my face,” winger Rasmus Asplund said after Power recorded an assist, his first NHL point, in the Sabres’ 6-2 loss to the St. Louis Blues. “It was fun to watch.”

Early in the contest at KeyBank Center, Power set up winger Vinnie Hinostroza for a short-handed opportunity, and as the rebound bounced out him, the fans started buzzing in anticipation of his first NHL goal.

Goalie Jordan Binnington stopped Power, but he wasn’t done creating offense. In the second period, following a pre-faceoff meeting with center Tage Thompson, Power fed winger Alex Tuch in the slot, earning the primary assist on the game-tying goal at 4:20.

“It’s kind of exactly kind of what we were talking about,” said Power, who explained the play was designed so he would move up a little before passing to Tuch from above the left circle.

Thompson grabbed the special puck for Power. Then Tuch nudged Power, 19, to lead the handshake line at the bench in his place.

“I loved when he got his first assist how excited the bench was, how excited the guys on the ice were, guys going to get a puck for him out of the net, other guys hopping over for the next line change going directly to him,” Sabres coach Don Granato said. “Really, really special moment for us as coaches to see how fast and how much our guys care to help him get acclimated here and how they are working to make him feel welcome.”

Clearly, Power, the first overall pick in 2021, feels welcome and comfortable in the NHL. In his first two games, at times he has demonstrated the poise of a veteran.

Fresh off a splendid debut in Tuesday’s 5-2 road win over the Toronto Maple Leafs, 6-foot-6, 213-pound Power looked more comfortable moving up into the play in the offensive zone.

“He was sniffing out opportunity offensively without giving much defensively,” Granato said. “That’s what we want.”

Of course, Power, who played with Dahlin and Henri Jokiharju and also killed penalties, looked like neophyte at times.

“When you play against these top players, you have to learn a lot and you obviously make a lot of mistakes where that you’re glad you’re able to learn from it,” Power said.

Granato said Power’s teammates “believe in his ability” so much he can hear it on the bench.

“They’re excited when he makes a play, when he has the puck,” Granato said. “Again, that’s a credit to the camaraderie and the selflessness that we have in that locker room. Fun to watch as a coach and coaches.

“This group has grabbed our attention and respect in that regard as a coaching staff. They’re tight-knit. They’re brothers. They really have a lot of characteristics of caring for each other.”

Asplund scored the Sabres’ other goal. Power was in the penalty box for cross-checking when David Perron and Brandon Saad scored power-play goals to tie the game and take the lead.

The Sabres pumped 37 shots on Binnington, including 17 in the third period.

“I was real happy with our guys’ effort,” Granato said. “I was happy with our guys’ execution for the most part to create chances. And it’s one of those games that you lose and you actually feel bad for your guys. They were dialed in and they put forth a great effort. And you’re disappointed that they didn’t get rewarded more for the effort and some of the execution. …

“In the end, you walk in the locker room and you know you have a group of guys that are just (ticked) off they didn’t win. And that feels good as a coach.”