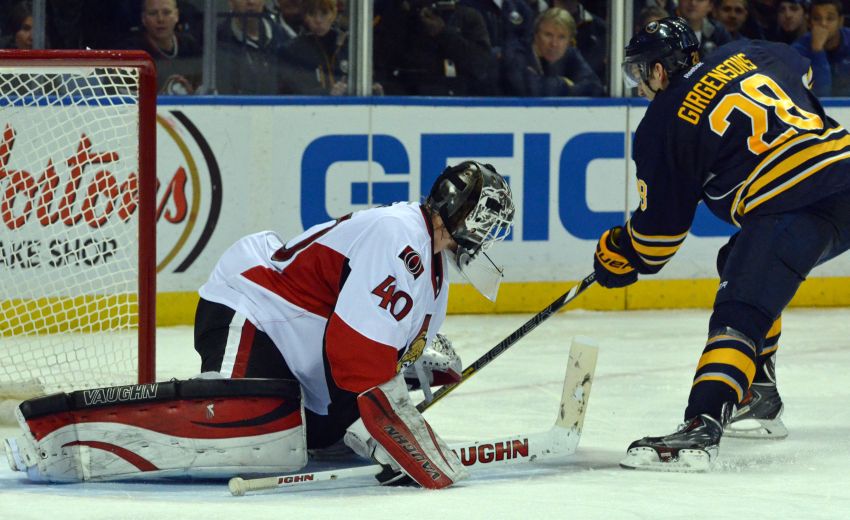 BUFFALO – The best part of the Sabres’ 2-1 shootout win, interim coach Ted Nolan said, came 15:30 into the second period, when officials disallowed what appeared to be his team’s go-ahead goal.

Wait, what? Why would Nolan say that?

The Sabres have crumbled under adversity all season. But on Tuesday, after a delayed penalty possession whistle wiped out Jamie McBain’s score, they kept fighting against the Ottawa Senators inside the First Niagara Center.

“It was pretty devastating when they called back the goal,” Nolan said after Zemgus Girgensons’ 10th-round shootout goal clinched only the Sabres’ seventh win. “You could tell they were a little bit devastated. But they overcame it, they forgot about it and they moved on. To get a win like that is an emotional win for us.”

Sabres goalie Ryan Miller wants his teammates to remember how they handled the adversity.

“We were able to win still, and that can be a positive, because too many times this year it’s negative things happen, ‘Oh, here we go again,’” Miller said. “Tonight was where something big could’ve happened for us, we could’ve gotten the lead there, and it didn’t happen, and we had to find a way.”

According to NHL’s “Situation Room Blog,” the referee said he blew the play dead for Jason Spezza’s high-sticking penalty when an Ottawa player gained possession of the puck. But replays provided in-house showed the puck crossing the line before the whistle blew and without any possession.

Naturally, the announced crowd of 18,594 fans howled in disgust.

“We played 65 minutes tonight,” Sabres center Tyler Ennis said. “When you work hard and play with that much effort, you’re going to get wins.”

Miller earned his 46th shootout win, a new NHL record, after stopping Erik Condra. He’s 4-0 in shootouts this season, something that doesn’t bother him.

He just wants to win.

“We haven’t had a chance to win a lot of games,” said Miller, who made 35 stops. “I want to win some games. So if this is going to be my opportunity to win a game for any number of games, I got to take it and give these guys some confidence.”

After falling behind 1-0 just 6:25 into the game, Girgensons’ second goal in two games – the rookie winger had one in his first 28 – tied it 13:25 into the second period, beating Joe Corvo to the puck near the bottom of the left circle. Girgensons then knocked the puck past Lehner, who barely moved.

“I just went there and gave a little baseball swing to the puck,” Girgensons said.

A month ago, as his scoring struggles wore on, Girgensons told himself that if he stayed with it, he’d start getting bounces.

“That shows on today’s goal,” he said. “All I did was hard work going to the puck. It was just a lucky bounce for me that it went in.”

Nolan added: “I think he’s getting rewarded for his work. He’s always worked. Good things happen when you do that. Now he’s getting some breaks. Not too often he’s going to get a goal from where he did tonight.”

Girgensons said he “was just ready” for his shootout call, his first attempt as a professional. The Latvian backhanded the puck past Lehner.

Matt Moulson, Brian Flynn and Steve Ott has the Sabres’ other shootout goals.