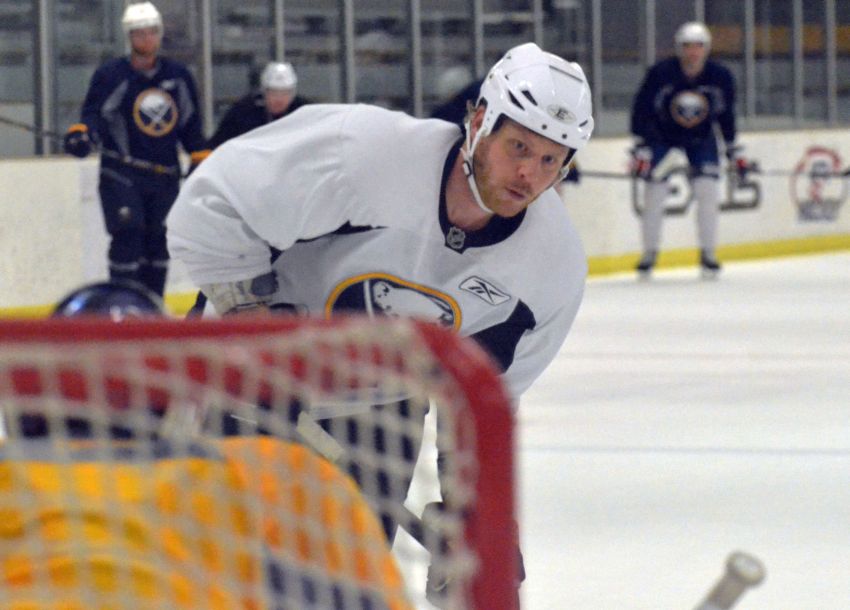 AMHERST – Forget that no drop-dead date to save the NHL season has been set 98 days into the lockout. Whether anyone acknowledges it, with Christmas and 2013 quickly approaching, the clock is beginning to tick loudly.

“A deal better be done in the next 10 days, or I guess you can say the league will just lock the doors again like they did (by canceling the season) in ’04 and continue to ruin the reputation of hockey,” Sabres winger Steve Ott said Friday after skating inside the Northtown Center.

Fresh off a sixth round of game cancellations Thursday, the NHL and the Players’ Association have about two weeks to reach a new collective bargaining agreement and begin preparing for what would most likely be a 48-game schedule beginning around mid-January.

Ott, who’s been outspoken throughout the entire work stoppage, said the NHL must come to the players next week “with a tangible offer.”

“We’ve been waiting for that to happen for the last five months,” Ott said. “That’s how that script has been running, and that’s what’s the most frustrating part about the script, because now it’s crunch time and now we can kind of, I guess you could say, expect kind of a good offer coming at us to hopefully save the season.

“If not, I mean, it’s ridiculous. I mean, at this point it’s completely ridiculous.”

The league and the NHLPA haven’t met face-to-face since talks imploded spectacularly two weeks ago inside a New York hotel. There’s a belief among some observers the sides could hunker down sometime during the first week of January – just around the point of no return – and hammer out a new deal.

Right now, no meetings are planned.

Meanwhile, the NHLPA’s vote enabling a disclaimer of interest has passed overwhelmingly, according to the Detroit Free Press. The 30-member executive board now has the authority to file a disclaimer, which would dissolve the union.

All Sabres cast their ballots, said defenseman Jordan Leopold, the team’s union representative. The NHLPA has until Jan. 2 to disclaim interest. It’s unknown what the union will do.

Ott said he voted yes “not in the sense of negotiating; it’s a sense of we don’t have a negotiating partner right now.”

For all the negativity surrounding the NHL right now, Ott feels the season will be played, something he’s been saying for months.

“I hope that there’s a season because I’ve seen the damage that it did in ’04,” said Ott, who spent 2004-05 in the AHL. “I was locked-out then. To see the damage that it’s already caused, the NHL brand taking such a beating. I don’t know. I can’t see it surviving another lockout without some big changes to the league happening.”

Ott was “pretty shocked” when NHL deputy commissioner Bill Daly said “yes” when asked, “Do we have a season?” during a radio interview with CBC’s Elliotte Friedman earlier this week. Of course, Daly was told he had to answer yes or no.

“How is there going to be a season if there’s no negotiating going on or whatnot unless they come (with) something to talk about?” Ott asked.

With games canceled through Jan. 14, the next batch will almost certainly be the biggest and the most painful – the rest of the season.

Ott knew more games would be axed this week. Still, he hasn’t become numb to the cancellations.

“Every single time it’s mind blowing, it’s absolutely ridiculous,” Ott said. “The script that they’re running off of, I guess it’s frustrating because when you have a non-negotiating partner that doesn’t care, they just continue to throw games away without anything and locking themselves in and getting a deal done. I think that’s what’s becoming frustrating for us players.

“Obviously, there’s a deal to be made. The willingness comes when I guess the paper runs out in their typewriter. Maybe we’ll have the end of that script.”