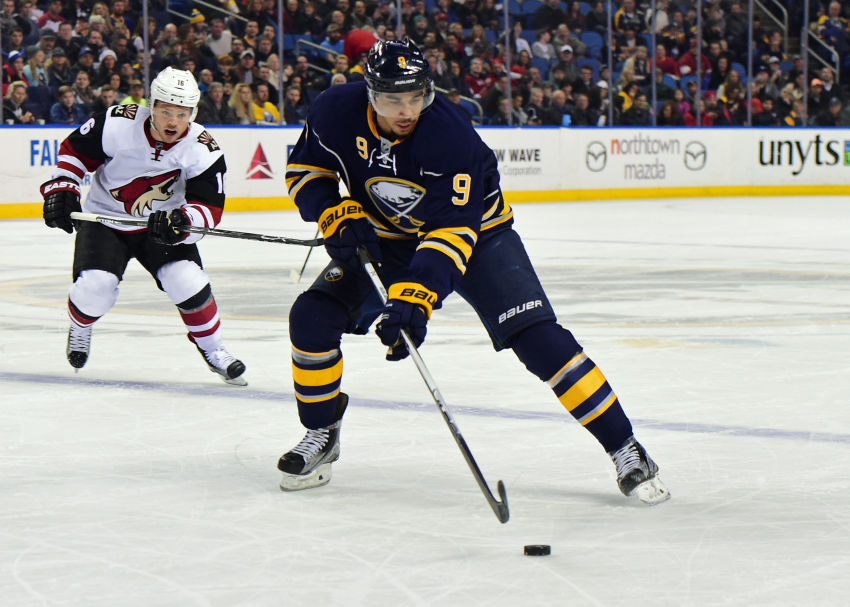 Not only are the Sabres finally scoring goals these days, they’re generating pretty ones, a sure sign the offense is humming for the first time all season.

The Sabres’ third win in four games, an exciting 5-2 victory against the Arizona Coyotes inside the First Niagara Center, was their fourth consecutive game with four goals.

How rare is that kind of offensive output? The Sabres hadn’t scored four times in four straight contests since they did it five times from Feb. 20 to March 2, 2007.

“It’s finally coming around,” McGinn said. “It was frustrating for a little bit. We stuck with it and we did the small things right, and we’re getting in those hard-nosed areas and they’re starting to go in for us. …

“We can’t change anything, because it can be taken away real quick.”

Remember, the Sabres scored only seven times during their recent six-game losing streak.

“Throughout the year it’s going to change,” Reinhart said about the offense. “It seems like yesterday we were answering questions on if we’re getting frustrated or not, so it’s nice to have. Once we get a couple it comes in a wave.”

“I think we’re getting on teams’ defense and we’re staying on the puck,” said Kane, who also scored into an empty net late. “We’re battling to create turnovers and I think there’s an urgency and a hunger to put pucks away, especially these last couple games.”

The No. 1 line of Kane, Reinhart and center Ryan O’Reilly has buoyed the offense.

– Kane has four goals and six points in the last three games.

– Reinhart has three goals in the last three games.

– O’Reilly has one goal and five points in the last four games.

“Sam’s goal, showing some nice patience and hands down low, I think we’re finally starting to get some chemistry going and really starting to figure each other out,” Kane said. “We enjoy playing with one another so I think it’s working out well so far.”

But the Sabres received other contributions Friday. McGinn’s goal, which put the Sabres up 2-1 13:33 into the second period, was his second goal and fifth point in the last four games.

Marcus Foligno’s second goal this season made it 4-2 11:44 into the third period.

Naturally, winning can be even more fun when you’re scoring goals.

“The guys are a little happier in the room,” McGinn said. “There’s some smiles around. The confidence is high. We’re working hard in practice right now and scoring a lot of goals because we went through a struggle.”

The Sabres got going after a first period in which they generated little and fell behind 1-0 when Max Domi scored the first of his two goals.

“There wasn’t a lot of energy and a lot of jam in the first,” Sabres coach Dan Bylsma said.

Then Nick Deslauriers’ hit on Zbynek Michalek in the corner with 13:12 left in the second period changed the game, Bylsma said.

“They had a few people that were more concerned over (Deslauriers) than playing the game at the time,” Bylsma said.

The Coyotes nearly got back into it when Nicklas Grossman appeared to score 19 seconds after Foligno. But the Sabres challenged, alleging Martin Hanzal’s stick interfered with goalie Chad Johnson.

The officials agreed, and when the goal was overturned, the crowd of 18,204 fans erupted. The Sabres had three critical goals lost to reviews earlier this season.

“Probably overdue for this building,” Kane said. “So I’m sure the fans were just as happy as we were.”