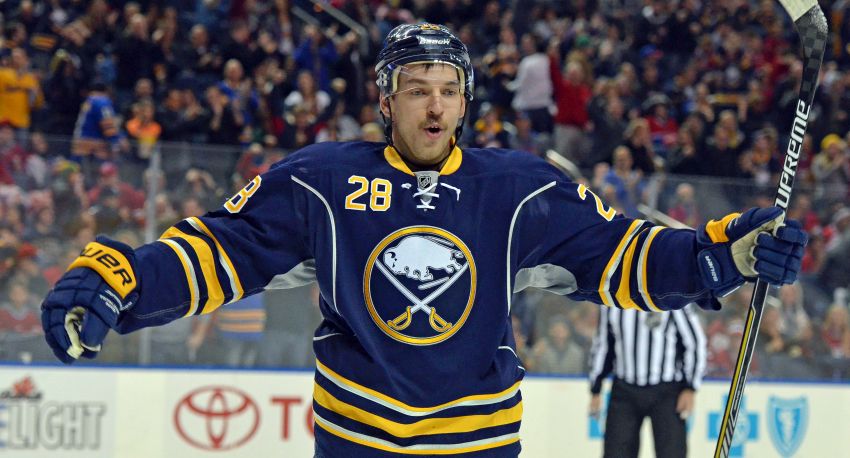 As of late Monday, Sabres center Zemgus Girgensons led all NHL players in fan voting. If Latvians keep clicking for the 20-year-old, their favorite player will be in Columbus on Jan. 25.

The only current Latvian NHL player is wildly popular at home. Fans watch Sabres games late at night or early in the morning, Girgensons said. His goals are featured on the news. A Latvian TV crew spent a week in town last month shooting a documentary on Girgensons.

“The fans back home have always been all about hockey,” he said. “They’re just kind of crazy.”

“He’s a very popular man over in Latvia,” Nolan said. “I think from the Sochi Olympics he got his name out there a little bit more. Playing the way he’s playing in Buffalo the first couple years, he’s getting his name out. He’s going to hopefully be a household name over here in North America as he is in Latvia. Good for him. He deserves everything he’s getting.”

Sabres defenseman Josh Gorges, out the last seven games with a knee injury, will play tonight against the Tampa Bay Lightning, Nolan said.

The Sabres, winners of five of the last six contests, could have more healthy bodies back up front, too.

Center Cody McCormick, out the last three games with a possible concussion, needed clearance from the doctor Monday to return.

Meanwhile, winger Drew Stafford could play tonight after a lower-body injury sidelined him for Saturday’s 4-3 shootout win in Montreal. Stafford practiced briefly Monday before leaving the session. He will skate this morning.

Nolan said the banged-up Myers had a maintenance day Monday and should be OK to face the Lightning. Myers briefly left Saturday’s game after his leg got tangled with Max Pacioretty. He could have practiced if he needed to, Nolan said.

In other injury news, Nolan said defenseman Andrej Meszaros suffered a “little bang” and is undergoing concussion protocol. Meszaros has missed one game.

Notes: Nolan moved Marcus Foligno, a regular winger, to center Monday beside Nick Deslauriers and Chris Stewart. Nolan wants to get Foligno on one of the top three lines. “Marcus is really coming,” Nolan said. … Sabres prospects Sam Reinhart and Nick Baptiste have been invited to Team Canada’s world junior camp. Reinhart, the No. 2 pick in June, could be named captain. The 19-year-old played nine NHL games earlier this year.