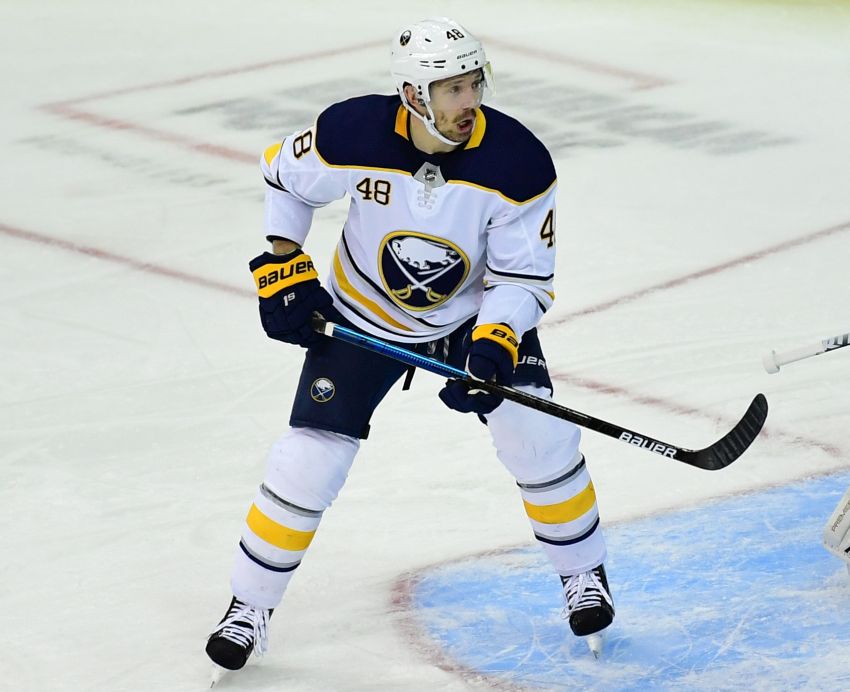 BUFFALO – Since recovering from a neck injury that sidelined him the first 33 games this season, Sabres defenseman Matt Hunwick’s action has been extremely limited.

Following a strong outing Jan. 29, Hunwick sat out another five games until Sunday afternoon, when Zach Bogosian’s lower-body injury – coach Phil Housley said he is day-to-day – pressed him into duty.

Hunwick showed very few signs of rust while playing 14 minutes, 35 seconds in the Sabres’ 3-1 loss to the Winnipeg Jets inside KeyBank Center.

Late in the third period, Hunwick couldn’t get the puck past the center red line, giving the Jets possession. They cycled around the zone before Blake Wheeler scored the winner with 3:55 left.

Hunwick got caught on the ice for a 1:43 before Wheeler scored.

Still, overall Hunwick looked solid for a veteran who has only received sporadic action. Housley liked his effort.

“He was very steady, his gaps were good, he was very good in the defensive zone, he was strong on the puck,” Housley said. “I like the way he was passing the puck on the outlet. He just looked like his normal self out there.”

Hunwick hadn’t played with Dahlin, 18, yet this season. He said he possibly practiced beside the youngster once.

“It wasn’t too bad,” he said. “I think got to try to remember I think I’ve only probably played with a different person. I’ve only played four games. Obviously, he’s a high-end skill player. I’m calling something, he sees something different, he can make that play on his own. In regards to that, he’s very easy to play with.”

It took former Sabres prospect Justin Bailey just 10 outings with the Lehigh Valley Phantoms to earn a recall to the Philadelphia Flyers.

The Flyers summoned the Williamsville native from the AHL club Sunday, 24 days after the Sabres dished him for winger Taylor Leier on Jan. 17.

“From top to bottom, from the coaching staff to the trainers, from the minute I got here my teammates in Lehigh have been awesome for me,” the winger told reporters following Sunday’s practice in Voorhees, NJ, according to the Cherry Hill Courier-Post. “The coaching staff has really helped me adjust to the systems. The atmosphere down there is really good. I think everyone is happy to be at the rink.”

It appeared Bailey’s days in the Sabres organization would be ending when he was waived and sent to the Rochester Americans before the season.

The Sabres’ current regime was Bailey’s third since Buffalo drafted him in the second round  in 2013.

“I was looking for a change of scenery,” Bailey said. “I couldn’t have been happier that it was in Philly. It’s obviously an organization that’s got a great history, a place I’ve grown up watching when I was a kid and I was ecstatic when I heard that was the place that would be my new home.”

Bailey scored five goals and eight points in 52 appearances with the Sabres.

The Sabres dished Lemieux, an agitating winger, to the Jets on Feb. 11, 2015 – four years ago today – in the blockbuster trade that brought Bogosian and winger Evander Kane to Buffalo.

Two other pieces of that eight-part deal – defenseman Tyler Myers and winger Jack Roslovic – played Sunday. The Jets used the first-round pick they received to draft Roslovic 25th overall in 2015.